Anytime you get the nickname “Mr. (insert city)” then you’ve done something right in life. Not only have you worked hard in your life, but you worked hard for something more than yourself and people took notice.

That’s exactly what Jimmy Gould became known for, eventually gaining the title “Mr. Alabaster” given to him by many across Alabaster for his work serving the city for 40 years. 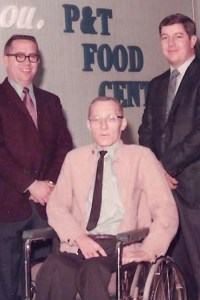 Jimmy Gould, left, known as “Mr. Alabaster,” passed away on Sept. 22, but his legacy is one that will live on through his accomplishments for the city. (Contributed)

On Tuesday, Sept. 22, Gould passed away at the age of 87 due to complications with COVID-19.

As a resident of Shelby County my entire life and an employee of the Shelby County Reporter since 2016, I have become very familiar with the county and the leaders in several cities.

It’s clear that Shelby County has some of the best leadership in the state from city to county leaders, but Gould set the standard for others to follow.

Gould was born in Mobile on Sept. 20, 1933, and later moved to Alabaster where he opened the PT Super Saver store in 1956 – only three years after the city was incorporated. He then served on the Alabaster Water Board from 1959-1972, helping to lay the foundation for the city’s future growth.

That’s where his selflessness started.

In 1964, he was elected to the Alabaster City Council and later became mayor pro tem from 1972-1976. After that, he served as Alabaster City Administrator until he retired in 2005.

And one of the most impressive tasks he helped see through during his time was the construction of the Alabaster Promenade, which he played a major role in helping come to the city. He played such a big role in helping it come to fruition that the city decided to name one of the roads in the Promenade after him (Jimmy Gould Dr.).

Even after his retirement, Gould stuck around and attended every city council meeting in recent years as well as serving on the Planning and Zoning board.

He enjoyed serving the city and making it one of the best places to live in the state. His selflessness and vision is one of the major reasons Alabaster has turned into the city it is now, and he set an example many of today’s leaders will continue to look up to.

While he is no longer with us, his legacy will last. Gould will never be forgotten. Everywhere you look throughout the city, his handprint is there, because the city wouldn’t be what it is today without “Mr. Alabaster.”