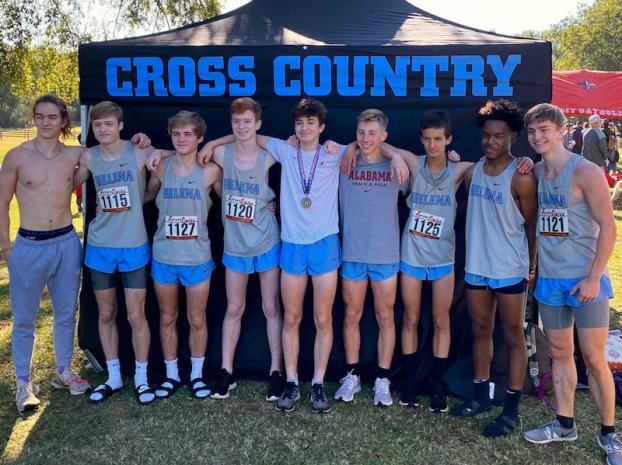 Helena’s boys and girls cross country teams competed at the 2020 American Christian Academy Invitational on Oct. 17 with the boys finishing second in the event and the girls fourth. (Contributed)

TUSCALOOSA – The Helena Huskies put together another strong event at the 2020 American Christian Academy Invitational at Tuscaloosa’s Munny Sokul Park on Saturday, Oct. 17, with both the boys and girls cross country teams finishing inside the top four.

The boys claimed second in the team standings thanks to having the individual winner in the event, while the girls finished fourth thanks to six top 50 finishers.

The two highlights were none other than the two Bartons, Brady and Mallory. Brady Barton continued a remarkable senior season for the Huskies by winning the boys race as the only runner to finish the race in less than 16 minutes.

He ran the event in 15:40.81, which was six seconds off his personal record time and his second fastest time of the season as well as his second sub-16 race this season. It also marked his second win of the season fourth top-three finish and fifth top-10 finish out of six events.

Mallory Barton also had a strong showing for the girls by finishing 14th with a time of 21:16.34. The race not only marked her third highest finish of the season, but it also marked a personal record for the sophomore in a strong field of runners.

As a whole, Helena’s boys had an incredibly strong showing as the Huskies missed out on winning the event by just two points. They posted 41 points compared to Collierville’s 39 points.

Outside of Brady Barton’s first-place finish, Helena got two other top 10 finishers, while five others behind that finished inside the top 25.

Aspen Warren and Edan Jamieson were the two top 10 finishers with Warren claiming sixth behind a time of 16:57.19, while Jamieson was one spot lower in seventh with a time of 17:04.29.

The girls team didn’t have as many high finishes, but they were consistent with five finishing inside the top 50 of the standings, which led to a finish of fourth as a team.

Both Madison Tsimpides and Lindsey May were able to claim positions in the top 30 with Tsimpides finishing the event in 22:27.49, which was good enough for 27th, while May finished one spot lower in 28th thanks to a time of 22:31.44.