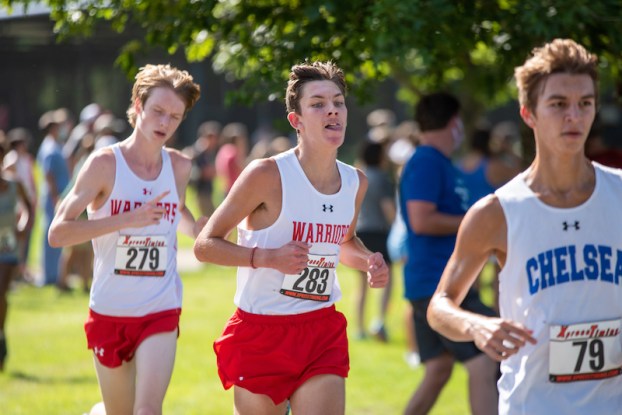 Jackson Hamlin was the highest local finisher at the Hewitt-Trussville cross country meet on Oct. 17. (File)

Competing in the boys and girls races, the two teams each had athletes step up against some of the state’s best teams, including host Hewitt-Trussville as well as Hoover and Mountain Brook.

But that didn’t deter the best athletes for Thompson and Pelham from having impressive performances. In addition to those two teams, Shelby County and Vincent also competed in the event.

The highlight was none other than Jackson Hamlin, who was the lone local top-10 finisher. The junior for the Warriors finished 10th on the nose thanks to his time of 17:06.53.

The time marked a new personal record for Hamlin, who now has three top 10 finishes out of five events and also finished seventh in the Warrior 2-mile Invitational earlier in the season.

Two spots behind Hamlin was teammate Jacob Cofield, who also had a personal record in the event with a time of 17:27.61. His finish of 12th was his best in a 5,000-meter event this season with his previous high finish being 25th. It also marked his first time finishing a race in less than 18 minutes.

Three of Pelham’s four runners in the boys race finished between 41st and 43rd with Thompson Gennari, Shaun O’Neil and Ian Howell finishing in that order. Gennari ran the race in 19:52.23, while O’Neil finished the event in a time of 20:01.96 and Howell finished with a time of 20:24.99.

Pelham’s Evans Kahara was the other runner competing for the team, and he finished 54th thanks to a time of 23:33.37.

Vincent was led by Lee Robertson in 49th, while Shelby County was led by Gabriel Aria in 56th.

The girls race didn’t feature as crowded of a field with Thompson and Pelham bringing two runners each to the event and a total of 32 runners competing.

That made it difficult to keep a pace with more space throughout the field, but Pelham’s Brooke Monti and Zitaly Pacheco continued strong seasons.

Monti, who won her first event of the season, picked up her third top-20 finish of the season by claiming 18th in the event after crossing the line in 21:36.87.

For Pacheco, her time of 22:04.60 marked a new personal record, as the senior finished 21st in the event.

It’s the final week of region play and we break down all of the big matchups this Friday night, including... read more