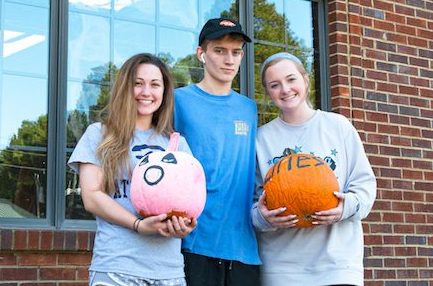 Three Golden Rule BBQ employees from the Helena location, Lydia Edwards, Kattie Jones and Cody Pace, have been the ones placing pumpkins around the city to help lift spirits this Halloween during a difficult year. (For the Reporter/Jeremy Raines)

HELENA — The pumpkin pandemic has recently swept through the city of Helena as decorated jack-o-lanterns have popped up all around town. After weeks of speculation, the masterminds behind the idea have been revealed.

Helena residents and Golden Rule employees Lydia Edwards, Kattie Jones and Cody Pace have been revealed as the original pumpkin placers, a fun task that has now been tackled by many.

Like most young people, especially during the COVID-19 pandemic, boredom is the spark for many great ideas including this one.

“Just one day after work we thought about what we could do to kill some boredom,” Edwards said. “Kattie wanted to carve pumpkins so we ended up doing that just for fun.”

The group ended up decorating around three pumpkins, when they realized they wanted to do something with them.

“Cody wanted to destroy them, but me and Kattie wanted to place them somewhere randomly,” Edwards said. “Then we just ended up placing them in random places and that is how it started.”

The group initially did it just for fun, but eventually wanted to see if they would get a reaction out of it.

“I remember when we put them out, a day or two passed and no one mentioned it,” Edwards said. “But then a few more days went by and it exploded. A lot of people were talking about it, and we just thought that was so cool.”

As many residents began talking about how inspiring or joyful they found the pumpkins to be, the group found inspiration and joy of their own. 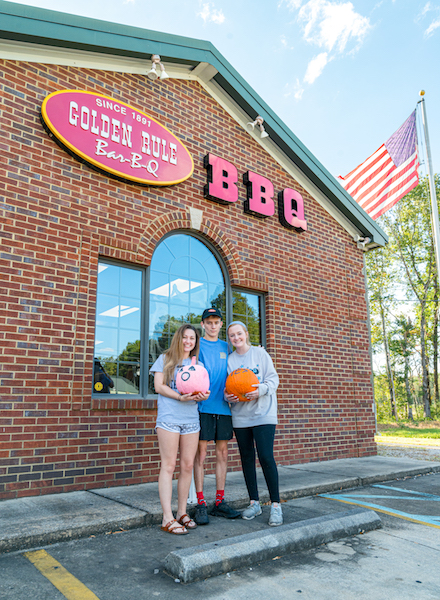 “We all definitely are happy and finding our own joy out of it, because it was very unexpected. It is just different. We never imagined it being a thing,” Edwards said. “We started off with three, and then we did about 10-12 once everybody started noticing. Our boss Jess at Golden Rule even helped fund it.”

The group’s boredom led to a trend as many Helena residents began putting out pumpkins of their own. The group said they first noticed it catching on when they saw an extra pumpkin near the one they placed on the bridge at Buck Creek.

Edwards said that Jones even joked with her about their influence saying “we saved the pandemic, we brought back Halloween.”

The group managed to keep their secret from the whole town, all while watching the fun and levity spread throughout social media through photos and posts, and by word of mouth in town.

The idea served its original purpose to kill boredom and went well beyond.

“It was just really exciting,” Edwards said. “It’s nothing that any of us ever experienced or expected, but we had a lot of fun doing it.”

Clearly, though it was not the intention to have an impact on others but instead to kill time, the group has had a positive impact on the lives of those living in the city with some random fun.