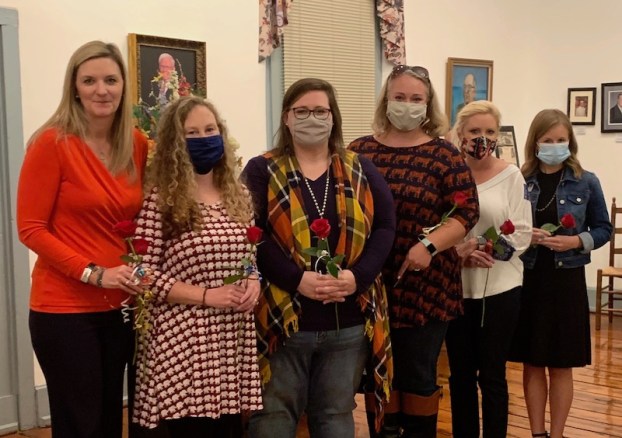 The new slate of officers for the historic Vignette Club are ready to serve their club and community. (Contributed)

The women’s clubs of Columbiana are long-standing organizations that offered generations of local women a community of friendship and an outlet to serve alongside their sisters in order to grow their city and county through work in women’s health, preservation of resources, and education through literacy and equality.

On Tuesday, Oct. 6, one of those clubs, the Vignette Club, held a ceremony to install a new slate of officers that will serve for the next two years. These terms align with the larger organization that the Vignette Club charters under the Alabama Federation of Women’s Clubs.

The Vignettes were established in 1949, when the Culture Club, which had been around for 20 years already, helped to start them as a second women’s club to serve Columbiana. They are most known for the funds they raise through the Miss Shelby County and Miss Shelby County Outstanding Teen Scholarship Pageants. The funds they raise through this and other activities, directly affect the city and county.

In the ceremony, a long-time member, Barbara Robinson who has held the mantel of a president in the past, bestowed each new officer a rose as she read them their responsibilities and asked them if they accepted. Each woman did accept, and the new officers are as follows: Samantha Rush as club president for a second term will also serve as publicity chair, Courtney Dudey as First Vice President, Chanda Jennings as Second Vice President, Jackie Finklea as Secretary, Bragan Feldman as Secretary, Jodie Tallie as Parliamentarian and Edna Booke as Historian.

The Vignette Club boasts several generational memberships with both mothers and daughters as well as sisters that are members together. Membership is limited to 38 in the club bylaws, but there are a small number of membership positions open this year. New members must be invited by current members, so interested parties should reach out to club officers or friends already involved in the Vignette club in order to join. All that is needed to join is a volunteer’s heart and a desire to be involved in the community.

The members of the Vignettes are always working behind the scenes and building strong lifelong friendships in the process. When asked, Rush told us what she loved about being a Vignette.

Rush said, “We have a wide range of ages, different backgrounds and different professions represented in our club which I love, and I was drawn to that diversity when I joined in 2003. I consider many of the wonderful women in our club as mentors, and I have learned so much from them. I also love that our focus is always on how we can help and better our community.”

By SCOTT MIMS / Staff Writer The pandemic won’t stop the monsters from making their way up Main Street in... read more