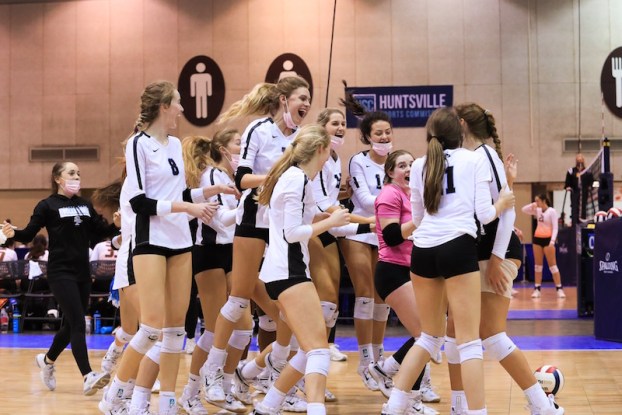 The Spain Park Jaguars advanced to the state tournament for the first time in 17 years after taking down Austin in the first round of Super Regionals on Friday, Oct. 23. (For the Reporter/Dawn Harrison)

Spain Park advances to State Tournament for first time since 2003

HUNTSVILLE – The Spain Park Jaguars have been a team determined to make history since the 2020 volleyball season began, and on Friday, Oct. 23, the Jags took a major step in that direction.

Competing in the first round of Super Regionals, Spain Park picked up a dominant 3-0 (25-6, 25-13, 25-10) victory against the Sparkman Senators to cement its spot in the 2020 State Tournament, marking their first trip to the tournament since 2003.

In the past, the Jaguars have faced demons in the postseason, struggling to get to Super Regionals at times and struggling to advance past that round if they did get there.

But determined this year, Spain Park won the area championship to earn the No. 1 seed from its region going into Super Regionals, which led to a matchup with Class 7A, Area 2 runner up Austin—a team the Jags felt good against after beating them during the regular season.

And the Jags left no doubt.

With one of the best student sections in attendance, Spain Park felt good early with momentum on the Jags’ side, and it showed in the opening set.

The Jaguars jumped out to a big lead with a 7-0 advantage and never looked back the rest of the way. They narrowly allowed more than five points to Austin en route to a 25-6 victory to kick start the Super Regional matchup.

Although that was the most lopsided set of the afternoon, it didn’t get much closer the next two sets either.

In the second set, the closest set of the match ensued, but Spain Park still had a clear advantage. The Jaguars led easily throughout, and eventually pulled away for a 12-point 25-13 win to take a 2-0 lead.

Now one set away from clinching a spot in the State Tournament, Spain Park’s confidence was soaring, and it showed again in the third set.

The Jags wasted no time putting the Black Bears away, not even allowing a thought of the match continuing.

In the blink of an eye, they were able to pull ahead quickly and sprint to a 25-10 victory to complete the 3-0 sweep and make history.

It marks just the third trip to the state tournament in school history for Spain Park, who previously made it in 2002 and 2003.

By making it to the state tournament, Spain Park becomes one of the final eight teams left in the 7A classification competing for the championship.

By ALEC ETHEREDGE | Managing Editor For the second consecutive week the Thompson Warriors and Pelham Panthers were both ranked... read more