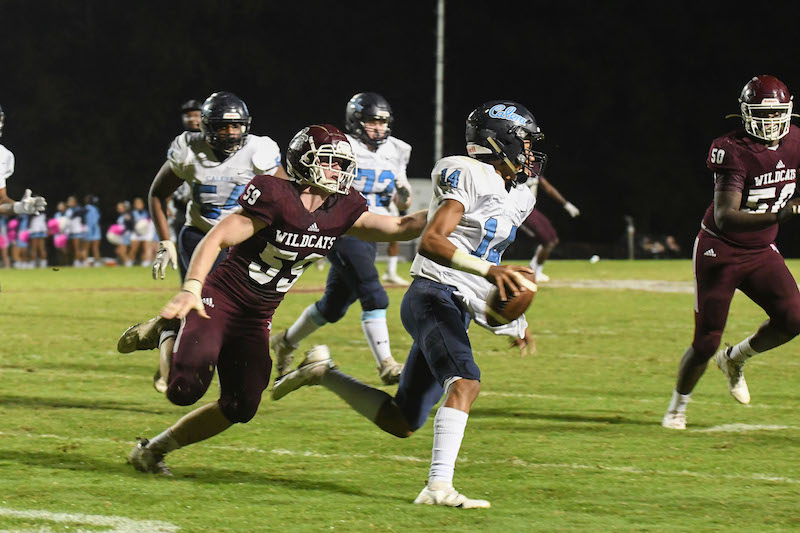 By RYNE GALLACHER | Special to the Reporter

ALEXANDER CITY – Emotions were high in a good way for the Wildcats following Friday’s 46-20 win over region opponent Calera, showing what this Wildcat team is capable of when healthy.

The game saw one of the most emotional moments of the season when senior Owen Wilson caught a pass from Carter Smith and took it 48 yards to the house for a touchdown, his first of the season. Wilson has been a starter for the Wildcats all season but has been limited in his production throughout the season. Wilson’s mother died in early September after losing her battle with cancer. The touchdown sent the crowd into a fury and also put the Wildcats up 14-0, and they didn’t look back all night.

“I was so happy for (Wilson) and proud of him,” coach Kevin Smith said. “The secondary was shading toward Elijah (Spivey) and Marcus (Freeman) on the other side, we told him to get ready. He ran a great route and Carter threw a great ball and Owen ran right under it. It was pretty and I’m just so happy for him.”

The Benjamin Russell offense was clicking all night, as it has throughout most of the season. The difference in Friday’s ballgame was the defense.

The score was 46-7 with a majority of the fourth quarter remaining, and that’s when coach Smith put in the junior varsity players and began to give up yards. Prior to that, the Wildcats played well in the 4-2 defense and were flying around making plays all over the field. Marquavis Brownfield had an interception that was nearly returned for a touchdown. Tight end Trey McMillian got some work in on the defensive line and made some plays as well, stealing a possession for the Wildcats by recovering an Eagle fumble.

“The big thing is they’ve hung together,” Smith said. “This senior class hasn’t seen much success throughout their time here, so we challenged them: ‘How are you going to finish and what are you going to be remembered for?’ And I think they responded.”

Benjamin Russell (2-7) went into the half with a 33-7 lead over the Eagles (3-6), but Carter Smith wasn’t done scoring yet. The Wildcats have jumped out to leads in several games this season but have been unable to hold the lead as the game progresses. Smith recognizes this weakness and put his offense full throttle, pedal to the medal coming out of the half Friday night and it worked, capping off the drive with a Kadarious Marbury touchdown.

“We told them at halftime that the word on the street is this team doesn’t finish,” Smith said. “Stopping (Calera) on their first possession of the second half and us going down and scoring to me was the difference and made us feel better.”

Smith said the difference in Friday’s win was a mixture of several things but mostly feeling better health wise and how the Wildcats dominated in the trenches on both sides of the ball.

“I felt our offensive line blocked really well tonight,” Smith said. “Calera kept giving us a five-man box and we told our guys if we can’t run with a five-man box we just need to stop playing football. Marbury had a good night and so did Demarcus McNeal. Even Dontarious Thomas looked good. I’m just so proud of this group for not quitting.”

The Wildcats are feeling optimistic going into next week’s matchup with a tough Sylacauga team that they can ride the momentum of this win while continuing to get healthier.

“In a nutshell, the message is going to be finish,” Smith said. “I think we came out relatively healthy tonight so maybe we are going into next week’s game with all our bullets.”