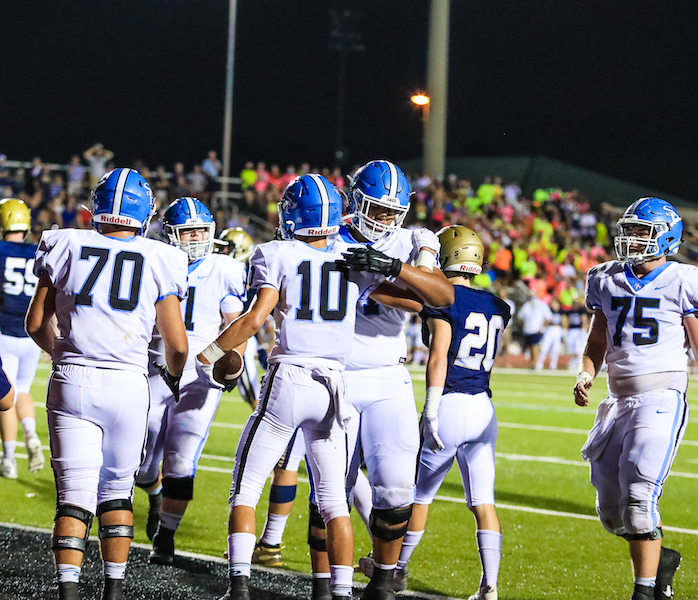 Cooper Kelley, No. 10, was on the receiving end of a Bennett Meredith touchdown pass in the final minute of the game, which lifted Spain Park to a 35-34 win against Tuscaloosa County. (File)

NORTHPORT – Spain Park’s football team fought back from a 20-point halftime deficit on Friday, Oct. 23, for a 35-34 win.

The Jaguars (3-6 overall and 1-6 in Class 7A, Region 3 play) never led in the game until there were only 34 seconds remaining. That’s when Bennett Meredith passed to Cooper Kelley from 6 yards out for the game-winning touchdown.

It was the third scoring pass from Meredith to Kelley in the contest, with all three coming in the final 14:07 of game time.

Damien Taylor ran it in from 4 yards out with 6:59 on the clock in the first quarter, and then Isaac Rodriguez was good on a 34-yard field goal attempt six and a half minutes later.

Brax Garrison passed to Christian Davis for a 9-yard touchdown with 2:48 left in the first half, and then Rodriguez kicked in a 45-yard field goal attempt as time expired in the second quarter.

Justin Pegues provided the needed spark for Spain Park in the second half, getting the Jags on the board with a 23-yard touchdown run that was followed by Drake Tabor’s point-after.

Taylor answered for the Wildcats with a 31-yard touchdown run, but the Meredith-to-Kelley connection began working late in the third quarter, first for a 2-yard score and then for a 50-yard score shortly into the fourth quarter.

Taylor’s outstanding performance continued with a 73-yard touchdown scamper, but Pegues added his second touchdown with 4:29 left to play to pull the visitors to within striking distance, setting up Meredith’s game winner with less than a minute remaining.

Spain Park’s 423 total yards in the game was short of Tuscaloosa County’s 453 yards, but the Jags did compile 30 first downs to TCHS’s 23.

Meredith completed 28 passes in 48 attempts for 298 yards. Kelley caught seven of those passes for 93 yards, David Moultry had five receptions for 70 yards and Pegues had seven catches for 68 yards.

The win snaps a six-game losing streak for the Jags with one game left, at Hueytown on Friday, Oct. 30.