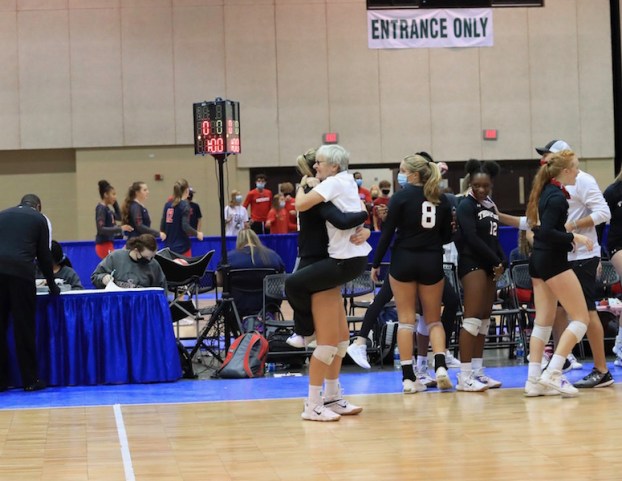 Thompson head volleyball coach Judy Green embraces in a hug with one of her players after the Warriors earned a second consecutive trip to the state tournament. (For the Reporter/Dawn Harrison)

HUNTSVILLE – When Thompson volleyball players Kaitlyn Grant and Baylee Southern leapt off the floor inside Huntsville’s Von Braun Center on Friday, Oct. 23 at 2:15 p.m., they got their hands above the net hoping for the best up 14-11 in a fifth set tiebreak with a trip to the state tournament on the line.

At that exact moment, Sparkman sent a kill attempt soaring directly toward both of them, but due to their athleticism and awareness, they combined to bat the ball directly back down to a surprised Senators’ player.

That surprise led to an awkward set as the ball fell between two Sparkman players, hitting the ground to give the Warriors a 15-11 victory and a second consecutive trip to the state tournament.

That final point was just one of many thrilling points between the two teams, as the No. 4 Warriors picked up a thrilling 3-2 win in five sets against the No. 2 Senators.

In the opening set of the match, Thompson got off to a strong start, showing it was ready to handle pressure-packed moments with its season on the line.

The Warriors were able to grab a slim advantage late in the set, eventually earning match point at 24-22, and they capitalized by winning the next point to close out a 25-22 set victory and pick up a quick 1-0 lead.

But, Sparkman was the No. 2 team in the 7A standings for a reason, and the Senators showed why in the second set.

It was another tightly contested set throughout, but Sparkman was able to create some separation late to eventually pull away for a six-point 25-19 victory.

That ended up being the largest point differential in the five-set match, but it didn’t deter the Warriors, who knew they were capable of winning.

In the third set, they bounced back with strong performance and stole momentum away yet again. Yet again, there wasn’t much separation between the two top five teams, but just enough for the Warriors to pick up a 25-20 win.

With the Sparkman’s season on the line in the fourth set, the Senators were determined not to go home just yet.

Thompson didn’t make it easy on them with a late surge, but like the Warriors in the opening set, Sparkman held on to finish off the final few points in a 25-22 fourth-set victory, which forced a decisive fifth-set tiebreaker.

And holding true to the rest of the match, the two teams went on to battle in thrilling final set with the season on the line for both.

Thompson jumped ahead early in the set with a four-point advantage, but the Senators bounced back to eventually tie the set at 8-8.

From there, however, Thompson was able to build off of last year’s experience after punching a ticket to the state tournament for the first time in years and found clutch play down the stretch.

The Warriors went on a 5-2 run to take a 13-10 lead and gave up just one more point after that before closing out the match with that final point for the 15-11 victory.

With the win, the Warriors advanced to the state tournament for the second time in two years and are set to play in the Elite Eight on Wednesday, Oct. 28 at 2 p.m.