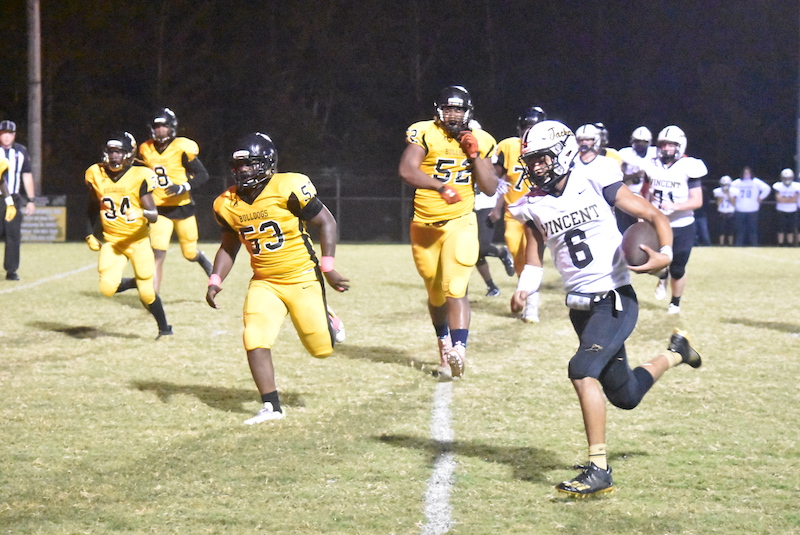 The Vincent Yellow Jackets couldn't find a rhythm offensively on Friday, Oct. 23, in a difficult road loss t LaFayette. (For the Reporter/Cody Estremera)

By CODY ESTREMERA | Special to the Reporter

LaFAYETTE – Entering its matchup with Vincent, LaFayette knew it needed to win against the Yellow Jackets on Friday, Oct. 23 to safely secure a spot in the playoffs. The Bulldogs answered the call in a big way, handily defeating Vincent 39-19.

The Bulldogs came out hot on offense, putting up 20 points in their first three drives.

On the first play of the game, senior quarterback Ty Daniel stepped back in the pocket and rifled a pass to junior receiver Vinay Singh, who made a great catch over a Yellow Jacket defender. Singh capped off the play sprinting into the end zone for a 54-yard touchdown. On their next drive, the Bulldogs relied on running back Jay Daniel, who was able to move the Bulldogs downfield all night. The senior tailback capped off the Bulldogs’ second drive with a 24-yard run in which he shoved off a would-be tackler a few yards before the end zone.

LaFayette scored again just a few plays later. The drive was set up by a bad snap that went over the Yellow Jacket punter’s head and was recovered at the three-yard line, Jay Daniel crossed the goal line for the second time of the night, charging up the middle for the third score by the three-minute mark of the first quarter. Coming into the game, 21 points was the most LaFayette had scored all year.

The Yellow Jackets were able to control the ball for most of the second quarter, forcing LaFayette’s only punt of the game, but the Bulldogs were able find the end zone one more time in the first half. On the Yellow Jacket 12-yard line, Shawn Holloway slipped off the line and was wide open in the middle of the field. Ty Daniel made the easy completion and threw his second touchdown of the night.

However, the Yellow Jackets went into the half with the momentum, as they were able to march downfield and score from about eight yards out when Will Harris powered his way into the end zone with just two seconds left in the half.

Harris and the Yellow Jackets scored to open the third quarter, when Harris connected with a receiver for a 24-yard touchdown, cutting the Bulldogs’ lead to 26-12, a score that lasted until midway through the fourth quarter.

The two Daniel brothers sparked the Bulldog offense just as they did in the opening quarter. Jay Daniel set up his third touchdown of the night when he was able to bust a long run down the left sideline, finishing the drive with a six-yard touchdown.

Ty Daniel finished the Bulldogs’ scoring when he scored from 39 yards out. In his run, he hop-stepped to let the line open a hole and sprinted down the left sideline, shoving off a defender along the way.

“We did what we were supposed to do,” Williams said of his offense. “You have to be coachable and do what you’re supposed to do. Tonight, that’s what clicked. We blocked and our backs ran hard. We did stuff that we’ve been doing. I haven’t changed anything that we’ve done in the last three months. It was just executed.”

Overall Jay Daniel, who was a receiver to start the season, finished with 216 yards on the ground and three touchdowns.

“He has stepped up and he’s been a workhorse,” Williams said. “He’s taken that load.”

While impressive on offense, Ty Daniel had himself a game on defense. The senior finished with four pass breakups and a pair of interceptions.

LaFayette finishes its season at home against Beulah.