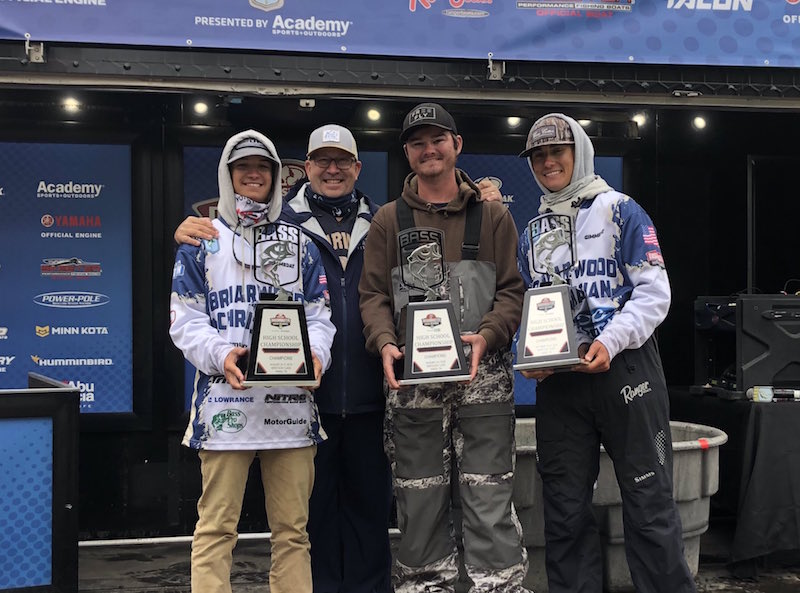 Tucker Smith, left, and Hayden Marbut, right, hold their Bassmaster High School National Championship trophies after winning the title on Saturday, Oct. 3. It marked the third title in a row for Smith. (Contributed)

PARIS, Tenn. – As a back-to-back All-American, Tucker Smith has put together a special career on the Briarwood Bass fishing team, and on Saturday, Oct. 24, he added to that history.

And thanks to a dominant first two days featuring a combined 10 fish weighing in at 39 pounds, 12 ounces, Smith and Marbut were able to accomplish the task and pick up a third consecutive title for the Lions.

“It feels amazing, especially because of the time of year,” said Smith, who is now attending college at Auburn University. “(It started) superhot to where your glasses are fogged up from sweat, to being so cold you wished you were at home. It’s kind of crazy to win both times of the year.” 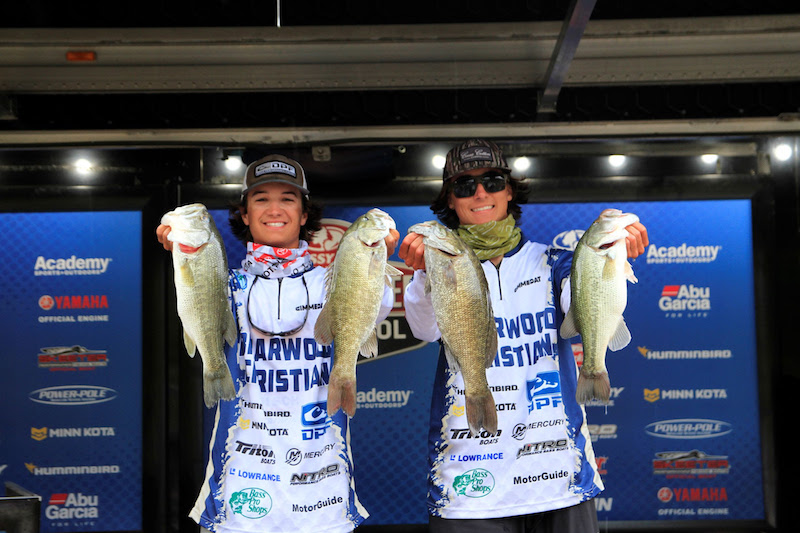 Smith, left, and Marbut hold up four of their fish caught during the championship. (Contributed)

For Smith, it was much more relaxing of a run to the title this year, despite the weather.

During last year’s National Championship, also held on Kentucky Lake, the Lions had to rely on a last-second fish reeled in by Morris, before arriving back to the weigh-in sight with 30 seconds to spare.

They ended up winning by just 1 pound, 12 ounces, making that last-second catch by Morris the key.

And just like last year, Smith and Marbut had a strong first two days of the tournament again this year.

On the first day, the anglers reeled in five fish weighing 22 pounds, 2 ounces, which was six pounds more than the next closest duo. Then, on Friday, the two followed that up with another five fish weighing in at 17 pounds, 5 ounces.

Nobody else through those first two days was even able to top 30.

Smith and Marbut fished specific areas of shallow bars they scouted before the lake went off-limits and again during official practice. Their tournament consisted of a couple of runs between Blood River, located north of takeoff, and about 5 miles south of Paris Landing.

“They weren’t just up and down the bar, it had to be a specific spot, like almost the size of a truck bed,” Marbut said. “We came back and checked them and they would be sitting on those spots.”

The two anglers were using a variety of top water walking baits, which worked well on aggressive fish.

“Moving it fast (helped),” Smith said. “We were kind of working it slow and they would miss it, and if you sped it up they didn’t have a chance to look at it. They would just come up and react to it.”

Marbut also added the big bass of the tournament at 7 pounds, 5 ounces, but it didn’t come easily as the fish hit his top-water bait and near the boat before coming unhooked right as it hit the net.

That played a key role in the big lead at the end of day one, as well as their overall strong lead going into the final round.

But with a cold front coming through overnight ahead of the final round Saturday, anything became possible with much cooler temperatures and a strong wind.

It made the duo’s strong first two days of utmost importance with fish struggling to bit one championship Saturday.

After running around most of the day trying to find a bite, they returned to the spot of their big bag and caught two smallmouth bass on a lipless crankbait.

“There were smaller waves than we thought,” Smith said. “So, we sat on it for three or four hours and caught those smallies.”

At the end of the day, the anglers would have won regardless thanks to their large lead, but Dylan May and Adam Troyer did put some pressure on bagging the only limit on Saturday.

That duo weighed in at 12 pounds, 4 ounces, which brought their total for the week to 37 pounds, 14 ounces.

But Briarwood finished close to 10 pounds more at the end of the tournament with 47 pounds, 5 ounces.

Smith finished his career with three national titles in a row, while Marbut picked up his first championship and will look to help carry on the tradition moving forward.