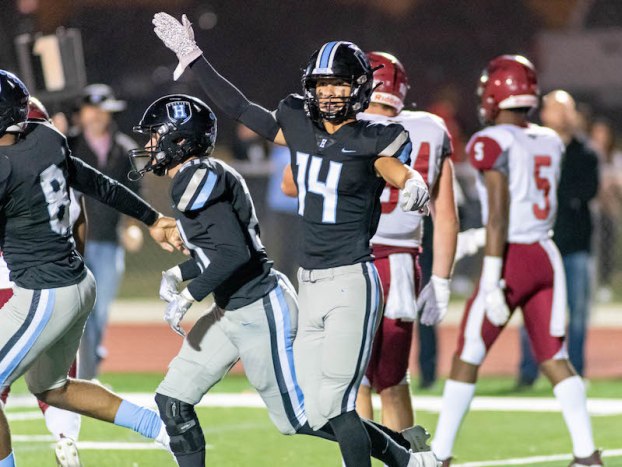 The Helena Huskies will take on UMS-Wright with major playoff seeding implications this Friday night to close the regular season. (For the Reporter/Neal Wagner)

Predictions: Breaking down the final week of the regular season

It’s the final week of the 2020 regular season. Let that sink in for a moment. Three months ago, we didn’t know if a high school football season would be played. Two months ago, we thought we might get just a handful of games in. But now, here we sit with one week left to play in the regular season and the playoffs on the horizon.

You can bet teams are excited to play this week, especially the ones that won’t be making the playoffs, making this their final game. It’s sure to be an exciting week of action. 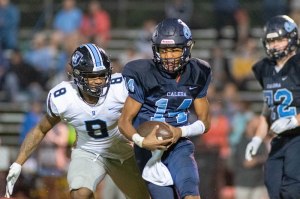 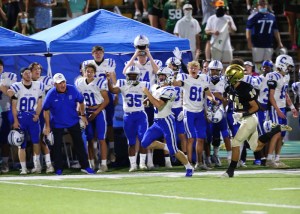 Chelsea vs. Calera (Game of the Week)

This matchup means nothing more than two county games fighting to finish the season with a win. Simply, pride is on the line, and you couldn’t ask for a better matchup with two programs heading in a great direction. Calera is sitting at 3-6 on the season, but has lost four of those six losses by eight points or less, while Chelsea is also 3-6 this season, but all three of their wins are head to head wins, while the Eagles have only picked up one head-to-head victory. These two teams seem evenly matched, but Chelsea is coming off a difficult stretch of games, competing against good teams, while Calera is coming off a difficult loss to a below-average Benjamin Russell team. Next year, I think both of these squads will be competing for region titles with most of their rosters returning, and this game should be a good preview of what we can expect with young talent all over the field. Chelsea 28, Calera 27 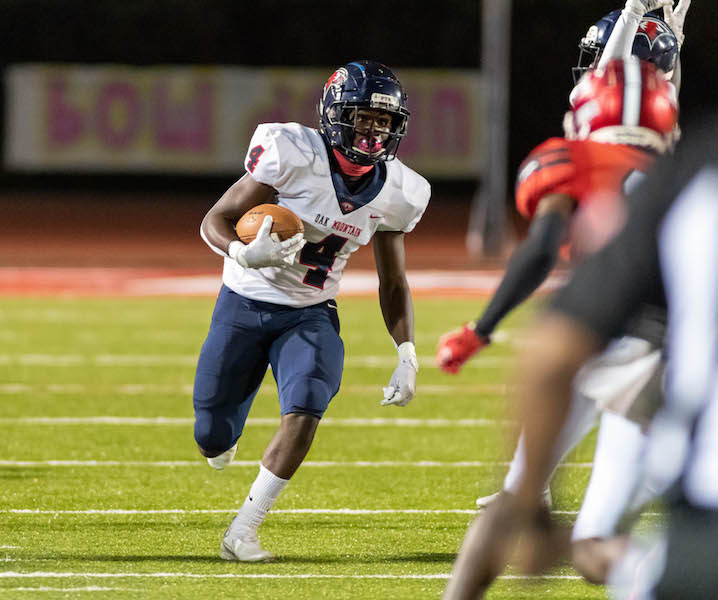 Oak Mountain’s schedule has been challenging all season, but this will be the third straight game against at top-two opponent. The last two came against 7A No. 1 Thompson and No. 4 Hewitt-Trussville. Now, the Eagles get a 6A team in Clay-Chalkville that has just one loss this season and is No. 6 in the standings. Oak Mountain is scoring 30.9 points per game and giving up 28.2 points per game, while Clay has scored 37 or more in six of seven head to head games and given up 20 or less in five of seven. But, the Cougars haven’t had to prepare for the Eagles’ option attack, which has scored 35 or more in five of nine this season. If Oak Mountain can get Noah Young involved in the passing game, Judah Tait and Evan Smith are so dynamic in the run game that the Eagles could pick up a win. I think these two offense are dynamic enough to create a back and forth game, but Oak Mountain has struggled the last two weeks and I need to see them get back on the right track. Oak Mountain 28, Clay-Chalkville 35 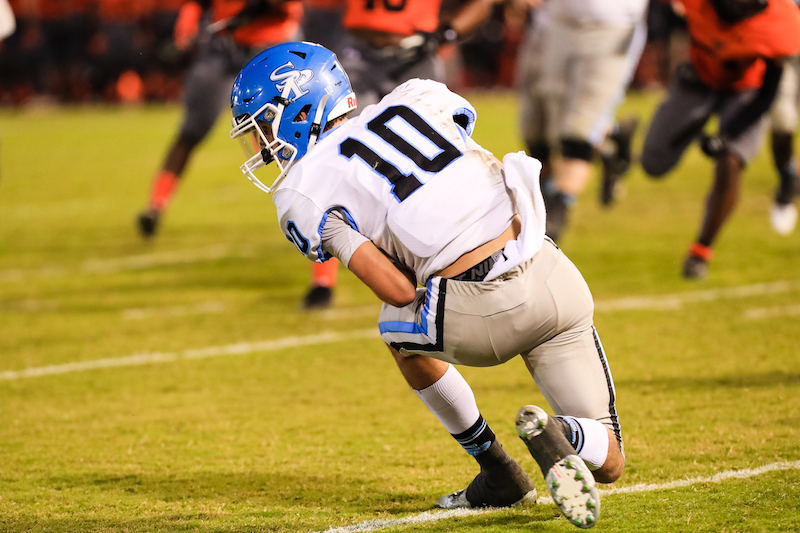 If there is one thing Spain Park head coach Shawn Raney does well, it’s get his teams to battle at the end of the season no matter the record. The Jags had lost six straight games going into last week’s matchup with Tuscaloosa County, and they found themselves down by 20 points with less than five minutes to play in the third quarter. But Spain Park came back and won 35-34 in the final 35 seconds of the game on a Bennett Meredith to Cooper Kelley touchdown pass and Drake Tabor extra point. Now, the Jags will look to close the season with two straight wins to give a young team confidence going into the 2021 season. Hueytown has scored 37 or more in four of its five head to head games this season, but the defense has given up 41 or more in three of those five matchups. Spain Park’s offense should be as confident as it has been all season, or at least since a 52-21 win against Huntsville to start the season. I think the Jags will go into this matchup hungry to finish strong and I think they will as long as the offense does what it is capable of. Spain Park 35, Hueytown 31 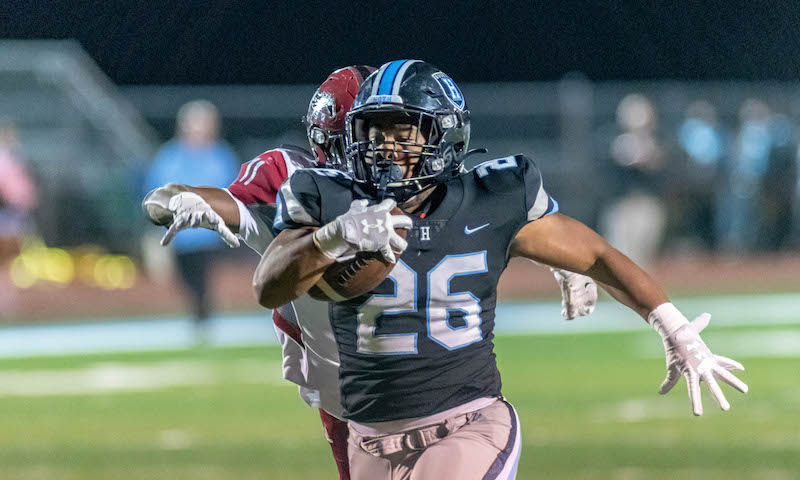 This is by far the biggest game of the week. It’s the only matchup with any sort of playoff implications, and they aren’t minor implications. If Helena wins this game, the Huskies will be the two seed in the region and play Carver-Montgomery at home in the first round of the playoffs. But with a loss, they’ll be the four seed, which means they’ll hit the road to take on fourth-ranked and No. 1 seed Opelika. That’s a big difference and something for the Huskies to play for this Friday. In order to pick up the two seed and get home field advantage, Helena will need to beat UMS-Wright. One positive as that UMS is one classification lower in 5A, but the Bulldogs have been strong this season. They have lost just three games, two of which came in overtime, while all three have been by seven points or less and two have been by two points or less. Oh, and they came against ranked teams. But, UMS-Wright’s playoff picture is set for the first round as the No. 3 seed. The Bulldogs don’t have anything on the line, while Helena does. The Huskies have gotten better and better about strong starts this season, and if they come out and set the tone early with their defense and a physical run game, they’ll have a strong chance. A team that has given up 28 or less in every game defensively and 18 or less in three straight head to head games, Helena will be motivated and ready to roll in this one. Helena 28, UMS-Wright 21 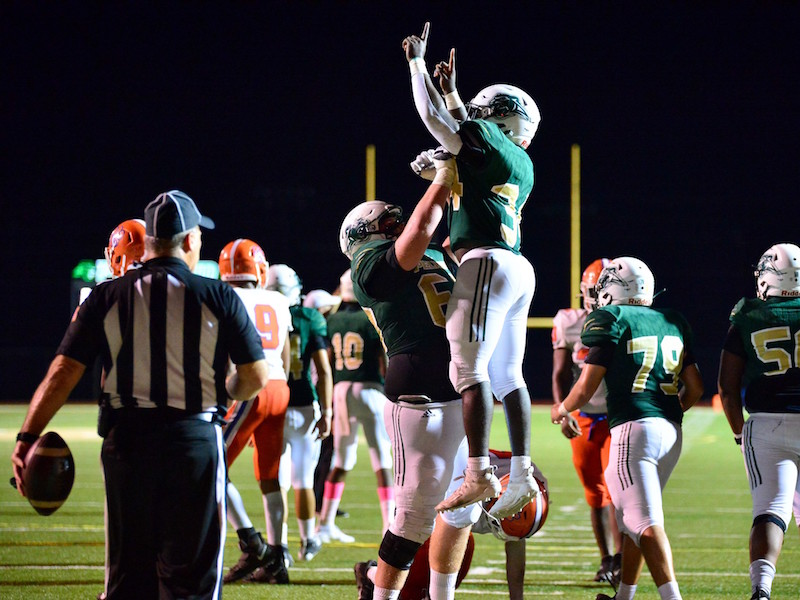 There may not be anything on the line in this game as far as playoffs go, but Pelham wants this one bad. It’s a renewal of a rivalry between two teams who have met the last six season in a row with Homewood winning all six matchups. This year, however, the Panthers look to be the better of the two teams. Homewood has scored 24 or less in every game and 19 or less in all but one game. The last three weeks, the Patriots have scored 15, 17, 0 and 6. With Pelham at 8-1 this season, the Panthers have played solid defensively recently, giving up 18 or less in the last three games in a row. In addition to that, the offense has been lights out led by running back Dylan Peterson, while Homewood’s defense has given up 28 or more the last three weeks. Even with the one seed locked up heading into the playoffs, I fully expect the Panthers to give it their all to pick up this win. Pelham 35, Homewood 20 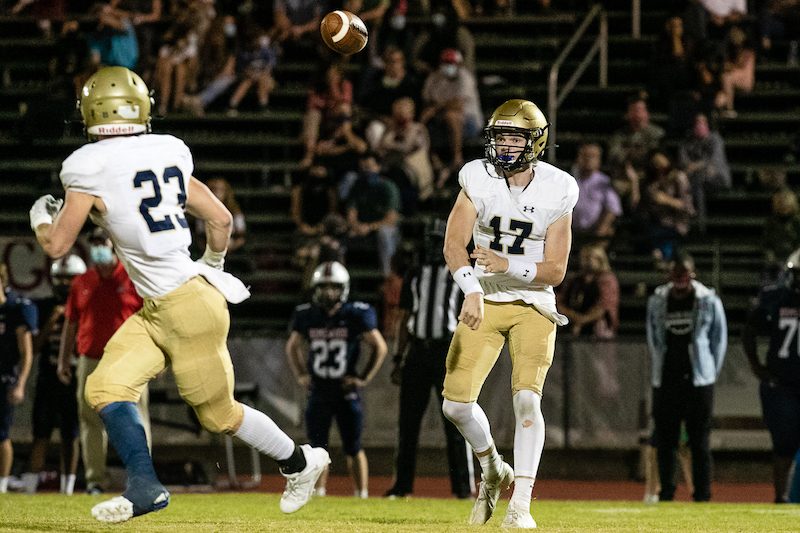 The Briarwood Lions continue to impress each week and are coming off a huge 28-6 win against Homewood where the defense played like a typical Briarwood defense and the offense played one of its best games of the season against a solid defense. Now, the Lions get a matchup with 5A Corner, who is 4-5 on the season. Corner is giving up 32.9 points per game and scoring 26.9 points per game. It’s a team that has also given up 33 or more in five of its last six games. Briarwood’s offense had such a balanced effort last week, that the Lions should capitalize on that this week. But even if they don’t have a big week, possibly resting some before the playoffs, the Lions’ defense should shut down Corner. BCS is giving up just 11.7 points per game, and that won’t all of a sudden change. Briarwood 35, Corner 14 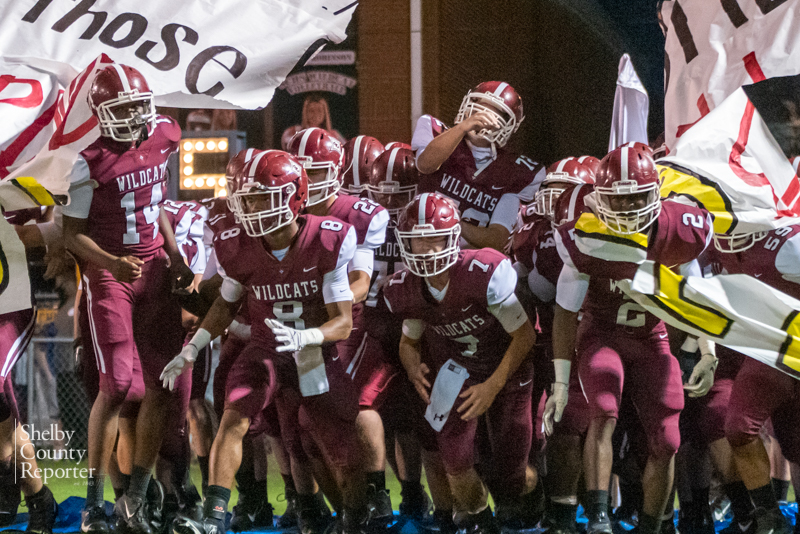 For the first time since 2009, the Shelby County Wildcats are heading to the postseason after a 34-6 win against Jemison last week. Not only that, the Wildcats have guaranteed finishing the regular season above .500. This week, they’ll be riding that confidence into a matchup with 3-6 Talladega ahead of a playoff matchup with Pike Road. Talladega’s offense has gotten going the last two weeks, scoring 42 and 66 points, but overall, the Tigers have struggled on that side of the ball, scoring 27 or less in every other game. Shelby County’s defense was the difference in the Wildcats making the playoffs this year, and if the starters play the full game this week, that should be the difference again. The offense has also gotten better, while Talladega has given up 46, 49 and 29 in the last three games. Shelby County 28, Talladega 20 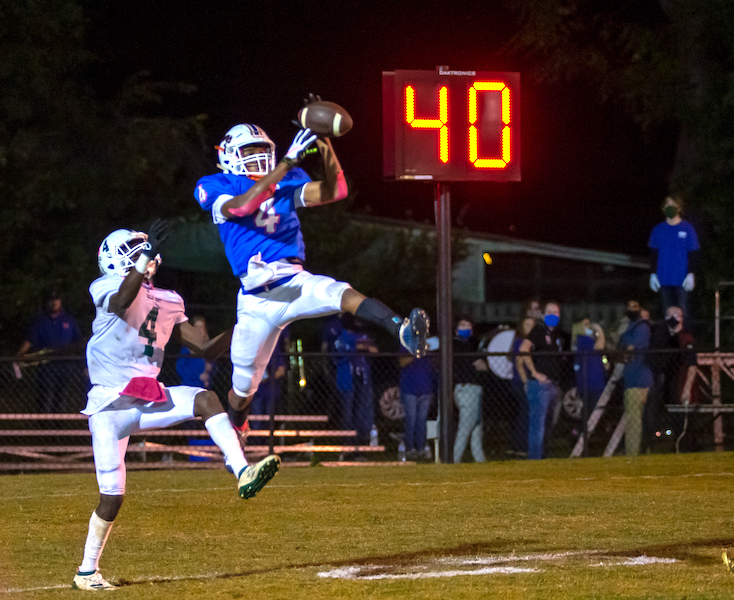 This will be an entertaining matchup, as Montevallo will play host to Class 1A powerhouse Maplesville on Thursday night. The Bulldogs have a three-classification advantage and have gained so much experience this year with young players forced to play from the start as well as others filling in for usual starters at different times. Now, they’ve won three in a row and are playoff bound after last week’s thrilling comeback 27-20 win against Dallas County. But Maplesville is 8-1 this season and always a state championship threat in their classification. The Bulldogs have shown promise against the toughest teams in their classification this year, and will now have to do it against another elite team. I think this will be an extremely close game, especially with Montevallo’s confidence right now. Montevallo 20, Maplesville 27 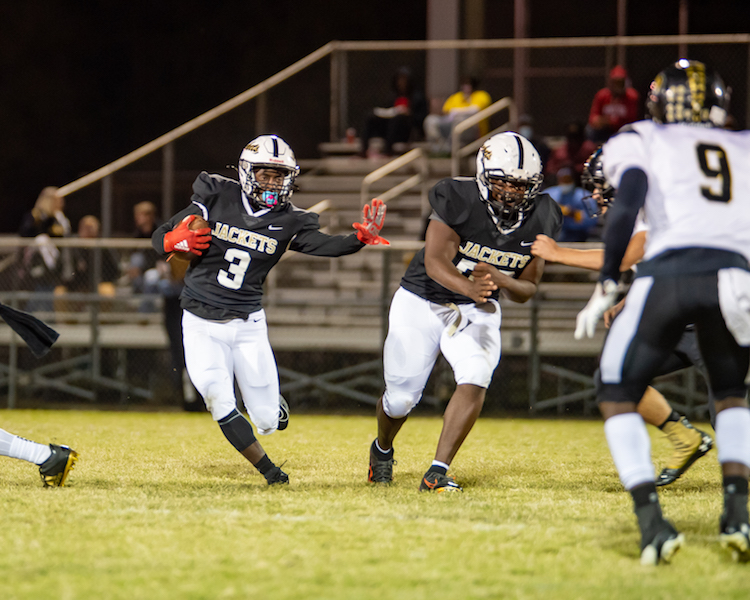 Vincent has lost four consecutive games, giving up 39 or more in all three, but the Yellow Jackets have a chance to end the 2020 season with a win this Friday against Prattville Christian. The Panthers have a classification advantage being in 3A, but they have yet to win a head-to-head game this season with their lone win coming via forfeit. They’ve given up 38 or more in four of their six games and have scored 20 or less in every game, including 14 or less in five of six. I expect Vincent to be back to full strength for the most part this week after a difficult stretch, the offense should be ready to roll again, while the defense won’t have to be perfect. Vincent 34, Prattville Christian 27

By CODY ESTREMERA | Special to the Reporter LaFAYETTE – Entering its matchup with Vincent, LaFayette knew it needed to... read more