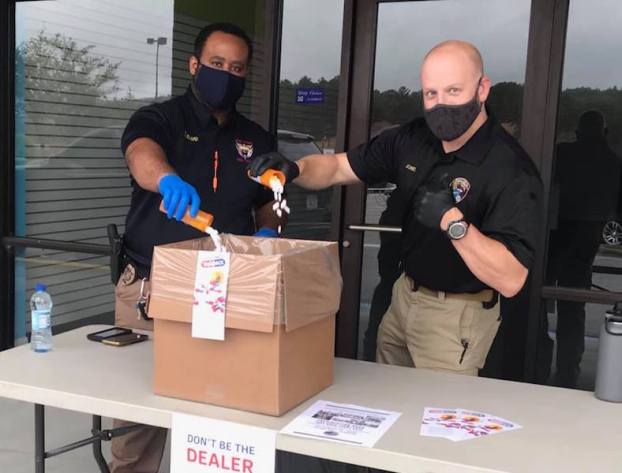 The county was able to recover 30 pounds of prescription drugs during National Drug Take Back Day on Saturday, Oct. 24. (Contributed)

Despite inclement weather the Shelby County Drug Enforcement Task Force was able to recover 30 pounds of unused or unneeded prescription drugs as part of the DEA’s National Drug Take Back program on Saturday, Oct. 24.

According to Lt. Stan Oliver with the task force, while they typically collect a significant amount more than this, the event was seen as a success considering the rainy weather and the current pandemic.

“For the family members of elderly people who recently passed who were prescribed a lot of different medications, they are stuck not knowing what to do with those,” Oliver explained. “This obviously gives them the security of knowing they can turn those over and they will be disposed of securely and properly knowing that no one else will get their hands on them.”

These types of programs are designed to be a no questions asked solution to getting potentially dangerous drugs out of homes, and out of schools and neighborhoods.

“On our end it gives us the assurance that these won’t end up in kids’ hands that might get curious and start exploring with drug use and go down the wrong path,” Oliver explained. “We got those unused medications out of peoples’ hands. It just was not as prosperous as it had been.”

The program had stations set up around the county allowing people to drive up and securely drop off medications of all kinds that were no longer needed, such as a relative dying, as Oliver mentioned, or if they were unused and had just been sitting around.

Oliver also explained that while this event was coordinated by the DEA, with their agency assisting, Shelby County does have secure drop boxes throughout the county for the same purpose.

“The boxes were provided through CVS with a grant so those who need to can go in and put their prescriptions in those lock boxes,” he said. “We clean those out once a month. On average we get around 30 pounds combined when we clean those out.”

Drug Enforcement Task Force Commander Clay Hammac also said he was proud of both the task force and Compact 2020 for being ready to serve despite the downpour throughout the event.

By NATHAN HOWELL | Special to the Reporter As the window for the 2020 Census self-response closed on Wednesday, Oct.... read more