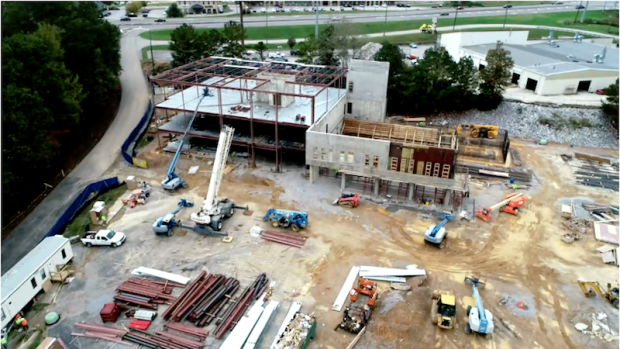 The new county services center under construction on U.S. 280 was among several subjects on which the Shelby County Commission was updated at a meeting Monday, Oct. 26. (Contributed)

COLUMBIANA – The Shelby County Commission spent a considerable amount of time Oct. 26 listening to updates regarding state inmates not being transferred out of the Shelby County Jail on time and county-wide preparations for Election Day on Tuesday, Nov. 3.

Shelby County Manager Chad Scroggins told commissioners the county has seen a record turnout of absentee voters ahead of the 2020 General Election on Tuesday, Nov. 3.

Scroggins said about 10,000 more absentee ballots had been cast in Shelby County than in previous elections as of Oct. 25, about a week before the absentee voting deadline and in-person voting at the polls.

“There’s a lot of preparation going on in the different (polling) locations, especially Precinct 10 and the temporary voting structure,” Scroggins said of the voting precinct near the intersection of U.S. 280 and Shelby County 41, where a new county services center is under construction. “We expect a very high turnout at the locations. We ask for patience in this process as we try to get the voters through the different locations.”

Scroggins said the county has been “all hands on deck” staff-wise to ensure the voting process goes smoothly and will seek as much reimbursement as possible through the Secretary of State’s Office for added personnel costs, including the employment of part-time workers to help with absentee voting.

Regarding the jail, Scroggins said there have been more than 500 state inmates who have not been transferred from the Shelby County Jail to Alabama Department of Corrections facilities after the normal 30-day period, putting a strain on Shelby County’s jail operations.

“This issue is getting larger and larger,” Scroggins said. “Since COVID started, the Department of Corrections has not taken in any inmates. They’re in the county jails. We’re at a breaking point with 559. We’re at a point where we’re stressing our system.”

“We have an additional 80 inmates that are under state supervision that are sitting there on a violation where they have to come before the court, but then they’re going to either go right back to our jail or I’m going to speak to the presiding judge about having some sort of week dedicated to nothing but probation and parole violators so that we can get them hopefully adjudicated and out of our county to the penitentiary where they belong,” Shelby County Sheriff John Samaniego said.

Scroggins said state funds through the CARES Act will help to offset but will not fully cover the cost to house state inmates for an extended period of time, and the county only receives reimbursement for a portion of the inmates’ healthcare costs.

“They can’t offer us more money that can instantly buy us space overnight unless they come up with $15 million and can build two pods to the jail,” Scroggins said. “I know the Sheriff’s Office has done an excellent job of managing the intake of every person that comes in there along with our health provider, but we should not bear the burden or the expense of the failure of the Department of Corrections to do their job.”

Scroggins also updated the Commission on the status of the aforementioned county services center project.

In addition to Voting Precinct 10, the three-story building will house offices for license services, the sheriff’s department, Central Alabama Wellness and 58 INC.

“This (building) will service a lot of people in the fastest-growing corridor that we’ve got in the county, which has been County Road 41 for the last so many years,” Scroggins said.

By SETH HAGAN | Special to the Reporter HUEYTOWN – As the temperatures dropped across the state, the one hot... read more