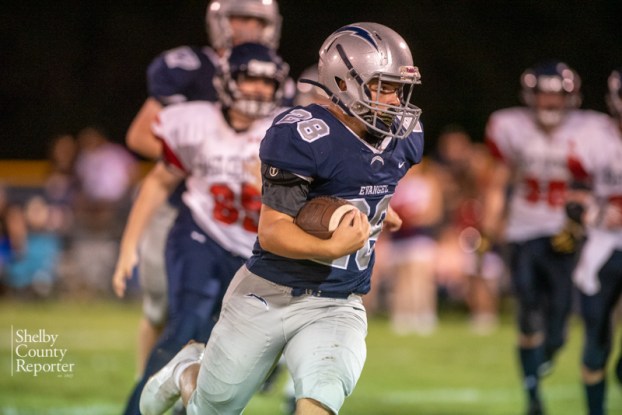 The Evangel Lightning closed the regular season with a 44-0 shutout victory against Evangel Christian Academy on Friday, Oct. 30. (File)

Evangel shuts out Evangel-Montgomery in tune up for national tournament

ALABASTER – Evangel Christian School wrapped its home schedule and regular season Friday night with a 45-0 shutout of Evangel Christian Academy (ECA) of Montgomery. After Hurricane Zeta left its mark on South Shelby County earlier in the week, the game still went on despite damage on campus.

“It was a good win for us after all everybody’s been through this week. We counted nine of our kids without power (from Hurricane Zeta). Some of them are displaced and living in a hotel. It’s been a tough week, but to have a little bit of normalcy for a few hours was good,” said ECS Head Coach Tim Smith.

Evangel closed the first quarter with a 21-yard pass from Whitfield to Harris Black to extend its lead 21-0. Kaden Jones added a 2-yard touchdown catch in the second quarter and Jett Lodge had a 35-yard reception late in the first half. He also added a 25-yard touchdown run in the third.

Chris Le added a safety in the third quarter to round out the scoring and finish with four tackles. Hayden Black led the defense with five stops.

Whitfield threw for 212 yards and five TDs on 15-of-25 passing. Lodge added 56 yards on four receptions to go along with 45 yards on three rushes for 101 yards total offense. Black had 37 yards on the night, while Aidan Lau and Mark Ayers each had a catch for 13 and 11 yards, respectively. Lucas Mast was 6-for-6 on point after kicks.

Evangel wrapped up the regular season with an 8-1 record but fell short of next week’s Alabama Christian Sports Conference 8-man football state championship game due to a tiebreaker after finishing 1-1 in conference with Ezekiel and Lighthouse.

“I think we’re playing our best football. Our defense has got a lot better. When you get a goose egg like tonight it’s always good,” Smith said. “We’ll take two or three days next week, and then come back and be in game week mode.”

Evangel won its second-straight National High school Football Tournament title last year, 92-90, over Ezell-Harding of Tennessee. Teams will travel to Florida on Nov. 13, staying at the Laguna Beach Christian Resort. The semifinals will be played Saturday, Nov. 14 at Pete Edwards Stadium in Panama City, followed by the championship and consolation games Monday, Nov. 16.