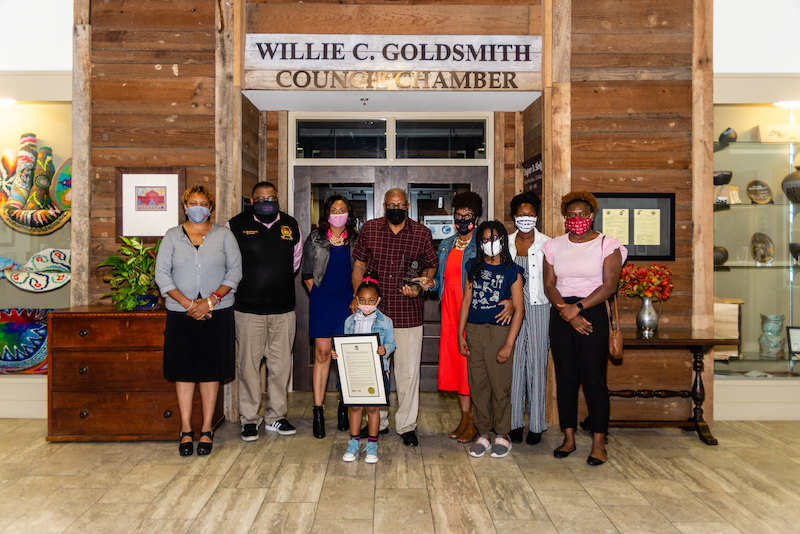 Longtime Montevallo City Council member Willie C. Goldsmith was honored for his 30 years of service to the city with a special proclamation reading and unveiling of his name above the council chamber on Oct. 26. (Contributed/Fotowerks Custom Photography)

MONTEVALLO – Montevallo’s City Council Chamber now bears the name of a man whose extensive service and leadership have changed his city for the better.

Willie C. Goldsmith Sr. was honored Oct. 26 during his final City Council meeting as the District 2 representative for his more than 30 years of service to the city with the reading of a proclamation and the unveiling of his name above the room he was instrumental in forming.

“Willie C. Goldsmith is a pioneer in his own right whose belief in hard work, education, uplifting of the community, family and trust in God positioned him to beat the odds and become a sustainable change agent to the benefit of us all,” the proclamation read.

Goldsmith has served as a member of the Montevallo City Council since 1990. He is the longest-standing City Council member and former mayor pro tem. 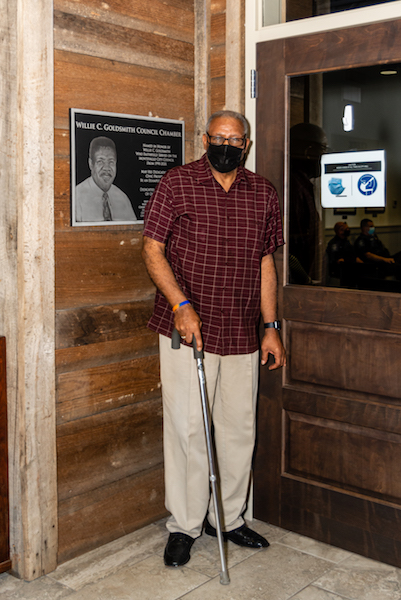 Goldsmith stands next to a plaque installed beside the Montevallo City Council Chamber doors to commemorate his 30 years of service to the city. (Contributed/Fotowerks Custom Photography)

An Atmore native, Goldsmith graduated from Escambia County High School and enlisted in the U.S. Army. Following his military service, he attended Daniel Payne College in Birmingham and earned a bachelor’s degree. He earned a master’s degree from Alabama State University and completed a few post-graduate classes at the University of Alabama in Tuscaloosa.

He then began his teaching career in the Bibb County School District. During his 30-year tenure, he was nominated to the Teacher of the Year Hall of Fame and awarded the key to the city of Centreville.

Goldsmith has been a member, steward and secretary at Ward Chapel A.M.E. Church in Montevallo.

He is a longtime member and officer of the Alabama Democratic Conference.

Following the proclamation reading, Goldsmith, his family members, fellow City Council members and others in attendance at the meeting made their way into the City Hall lobby to watch as outgoing Montevallo Mayor Hollie Cost unveiled the lettering bearing Goldsmith’s name above the council chamber.

“You’re really special, and the city wouldn’t be what it is without you,” Cost said to Goldsmith.

“I’m so proud of what we’ve been able to accomplish over the years,” Cost said. “I think we take our situation and our camaraderie for granted sometimes, but what we’ve experienced is special, and it’s unique. We’ve worked together without ongoing conflict, and we’ve always demonstrated respect for one another even when disagreeing.”