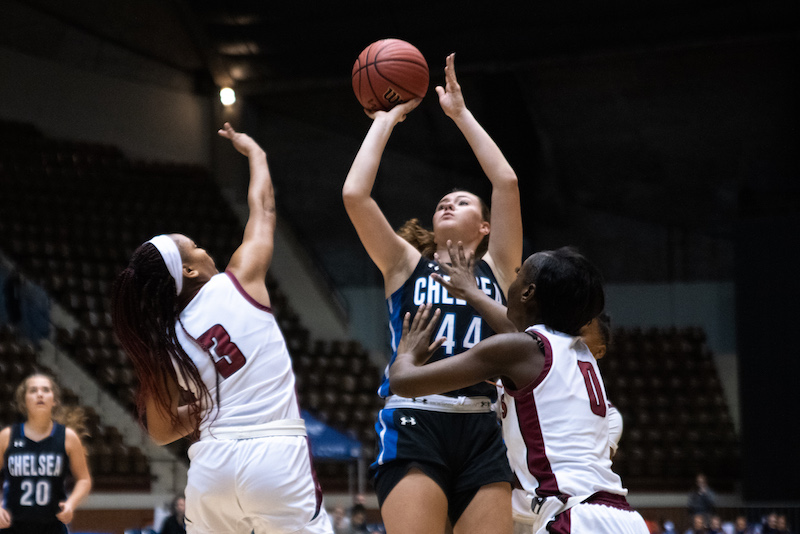 The Chelsea girls basketball team has made two consecutive Sweet 16s and is hoping to go a step further this year. (File)

Chelsea – Coming off a 26-6 season and a second consecutive trip to the Sweet 16, the Chelsea Hornets are looking to continue their successful trend under third-year head coach Jason Harlow during the 2020-2021 season.

The last two years, Chelsea has finished above .500 with 16 and 26 wins, and fell by just 10 points to Dothan last year to prevent a trip to the Elite Eight.

Now, heading into the new season, the Hornets are hopeful they continue to improve and take that next step in the playoffs this year.

“My confidence level is high because of the kids we have in the program and their approach,” Harlow said. “I never have to coach effort with these kids. They do things the right way. Because of that, I feel confident going into this season. But we realize we’re in a difficult area and will have our hands full.”

In addition to the difficult area, Chelsea will also have to deal with the loss of seniors Jordan Parker and Pressley Rains, who were both on the All-County team last year.

Parker was on the First Team after averaging 11.8 points and 6.1 rebounds per game, while Rains earned a spot on the Third Team thanks to her balance of scoring 8.6 points, 5.1 rebounds and 2.2 assists per game with 79 steals.

The Hornets, however, will get back seniors Mackenzie Titus and Ellen Fleming. Both players are taller at 5-foot-11, but add athletic presences on both ends of the floor with great shooting techniques.

“Our confidence level is really high,” Fleming said. “We have some big shoes to fill, but have plenty of girls to fill those shoes this year.”

The team plans to get up and down the floor this year, playing slightly quicker than year’s past, but Chelsea will hang its hat on playing aggressive on the defensive end with 100-percent effort.

“We’ll play hard and have maximum effort,” Titus said. “We really enjoy practicing together because it doesn’t feel like there is anybody not giving 100 percent. Everybody wants to be there and train and do it right, and we carry that same attitude into each game.”

Fleming add that the effort in practice was key to how they perform.

Harlow knows that those two senior leaders will be key this season, and he trusts them fully.

“The biggest thing these two bring to the table is their leadership by example. I never have to coach effort,” he said. “When they step off the floor, there will be no what ifs. They’re going to know they gave everything they had to the program.”

In addition to Fleming and Titus, Sydney Schwallie, Nia Cummings, Sophia Brown and Ashley Washington will play key roles for the team.

Schwallie, a guard, will be a true scoring threat, especially while pushing the ball and from beyond the arc. Brown, still a sophomore, will be big in the post, while Cummings will tackle a guard position and Washington the forward spot.

“What we didn’t lose at the end of last year has laid the foundation to withstand some of those losses that we did have,” Harlow said. “I think the difference this year is that we are so balanced. Last year, it was don’t let Jordan Parker go off, but this year, we have so much balance. From 1-10 on that varsity roster, we’ll be tough to guard because of that transition game.”