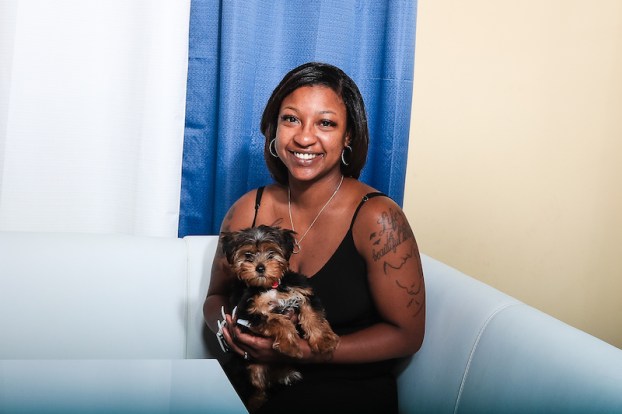 After being exposed to domestic violence as a child, Chelsea resident Ashley Wheeler decided to form a nonprofit organization, A2Z Hope Inc., to help other women and children around the world who are coping with domestic violence and other traumatic situations. (For the Reporter/Dawn Harrison)

CHELSEA – All is quiet in Ashley Wheeler’s house at 10 a.m. on a Tuesday morning. With her 5-year-old son, Zethan, at school and her husband out of the country, she has the family’s dog, Combo, and the remnants of the morning news to keep her company.

The Wheelers moved to Chelsea about three years ago. Traveling and living in different cities has been the norm for Ashley and her husband, Zelous, a professional baseball player for the Tokyo Giants. A Childersburg native, Zelous’s career has taken them to New York, Milwaukee, Baltimore and beyond.

“I have traveled with him since I was 19,” Ashley said. “We were high school sweethearts.”

Friendly and soft-spoken, Ashley is the type of person who makes a stranger feel as if she has known her for much longer. Maybe Ashley’s house isn’t always so quiet—surely not when her young son is at home—but it’s easy to imagine Ashley having great fellowship with her family when it’s not.

What’s difficult is learning Ashley’s backstory, a childhood she cannot revisit without tears coming to her eyes. The traumatic experiences of witnessing her father abuse her mother clouded her young years and trailed her into adulthood.

The physical violence started early in her parents’ relationship, before Ashley and her brothers were born, and continued to snowball. “She was beat while she was pregnant with each one of us,” Ashley said of her mother. “It continued our entire childhood. One reason I like to travel and spend lots of time with my child and make a lot of memories is because I don’t have pretty much any as a child.”

The family moved around, sometimes in and out of shelters to make ends meet if Ashley’s father had left them again. When he was around, the fear of what he might do to her mother was all-consuming.

An incident that Ashley said still haunts her today involved her father knocking out her mother’s teeth. Even during the worst times, though, Ashley doesn’t remember ever seeing her mother retaliate.

“I never understood why it was happening,” Ashley said of the abuse. “Sometimes, I blamed myself and thought it was my fault. That’s traumatic as a little kid. You shouldn’t have to see or go through something like that.”

As she grew older, Ashley realized her father was battling demons—mainly alcohol and drugs—that had nothing to do with their family, the people who bore the brunt of his anger.

Despite all of the trauma, Ashley still longed for her father’s presence in her life. She remembers talking to him right before her high school graduation and him promising he would be there. But as she looked at the faces of her other family members sitting in the audience, all she could see was the one face that was missing.

“Even though he did what he did to my mama, he was still my dad, so I had double the pain,” Ashley said. “I was looking for him, and he never showed. I wondered for a long time, did I do something?”

It’s a question that has haunted her for years, although she is trying to grasp the idea that her father is solely responsible for his actions, and no one else—not Ashley or her brothers or their mother—is to blame.

And a big part of her healing has occurred through A2Z Hope Inc., a foundation Ashley created in 2017 to help women and children around the world who are coping with domestic violence, child abuse, bullying and sexual assault through programs, partners and public action campaigns.

“I know the feeling and hurt and pain and trauma that it causes,” she said.

Flashbacks take Ashley back to the moments she huddled in a corner of her family’s home and prayed fervently for an escape.

“I can remember as a young girl, plenty of times, praying and asking God to get us away from this. I prayed as a child, and it seemed like it wasn’t working,” she said. “But all along, He (God) was building me for this, so I can be that prayer for another child or woman.”

As the founder and president of A2Z, Ashley said she hopes to reach more people with her story—and to let fellow survivors know there is hope on the other side of the storm.

Ashley said she and her dad have a good relationship today, as do her dad and her son.

When she told her father several years ago she had decided to start the foundation and share her story, Ashley said he was OK with it and apologized for what he did.

Although Ashley’s personal journey with forgiving her father is ongoing, she believes working with her foundation to provide support for others walking similar paths has helped her to move forward in her journey.

As she and her behind-the-scenes team work to get A2Z off the ground, Ashley hopes to raise more funds to pay for counseling and mental health services for domestic violence victims, and to partner with other organizations, such as King’s Home, to reach more people with much-needed resources.

“My goals are to hopefully gain more partnerships with other organizations and foundations doing the same as me, and come together and continue to raise awareness and reach out all over the world for abused women and children,” Ashley said. “We plan to host events to raise money, at least three major events each year, and then other fundraising ideas to keep the cash flow coming in.”

By ALEC ETHEREDGE | Managing Editor MONGTOMERY – Meeting at the capital in Montgomery to discuss COVID-19 for the first... read more