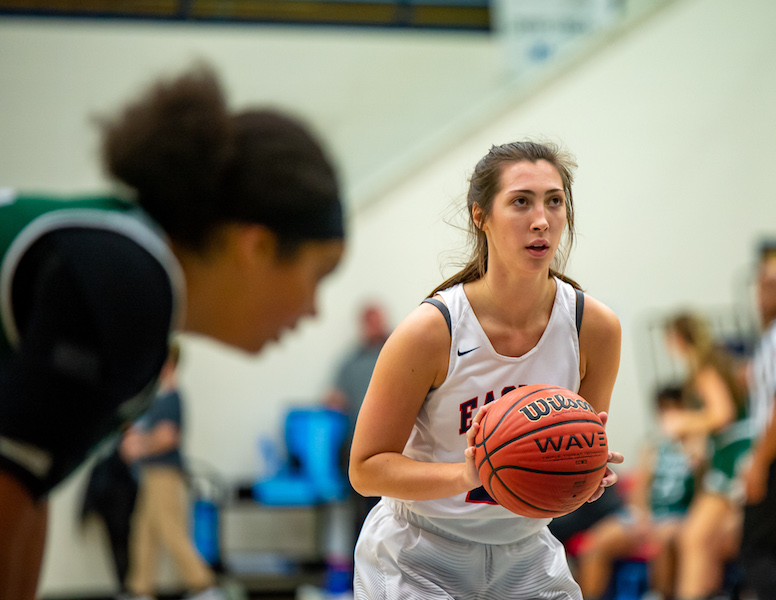 The Oak Mountain girls basketball team will hope to return to the Sweet 16 during the 2020-2021 basketball season after making it that far last year. (File)

NORTH SHELBY – Oak Mountain’s girls basketball team was able to punch a ticket to the Sweet 16 for the first time in years during the 2019-2020 basketball season, and heading into a new year, the Eagles are hoping that was a stepping stone to consistent success.

It was a year that saw some inconsistency, but led to a Sweet 16 berth thanks to a 44-38 comeback victory against Thompson in the opening round of the area tournament.

“This year is going to be fun,” Parmer said. “I’m excited to get started this year. We are going to look dramatically different than we have in years past. When you have that kind of a change, you have to go back to the drawing board and see what you can do with the personnel that you have.”

Losing senior leaders Hannah Edwards, one of the tallest and top players in the state, as well as Abi Brown, a competitive and talented player, the Eagles will lose their two best players.

But stepping into their place will be talented seniors Julia Tucker and Riley Sullivan. Parmer expects a lot from both of those players.

And those two enter this season confident after what they saw was possible a year ago.

“We had one goal and came together last year,” Sullivan said. “We didn’t stop until we reached it. Playing on the JSU floor and that experience was really cool. After looking at last year we feel confident. We don’t want to be saying at the end of the year ‘We could’ve, we should’ve.’ We want no regrets.”

Tucker knows that in order to get back there and advance further, she and Sullivan will play a big role.

“We’re going to have to take on a lot more responsibility, especially since it’s our last year,” she said. “As long as we carry it over and it reflects on our players, we will be in good shape. We need to prove to ourselves that we can do it and earn it.”

Tucker will play anywhere on the floor Parmer needs her to, especially forward and guard, while Sullivan will handle the point guard position.

In addition to those two, Anna Fleming will join them as the final senior, while there are three juniors.

One of those juniors will be guard Abby Gordon, who will play an important role this year.

In addition to those three, Charity Shaw and Regan Whitaker will play key roles.

Shaw worked hard during the summer and is improving her shot, overall game and foot work. Parmer describes her as a hard work who wants to do anything she can to help the team.

Whitaker will play the five spot and will be key this year as a freshman.

But beyond those five, there are several players on the team that should contribute and will need to, because the Eagles will be much smaller this year.

Parmer said that will allow them to do some different things than they have in the past.

But no matter who is on the floor, Tucker, Sullivan and Parmer all described this year’s team as the closest they have been a part of, and that’s what they hope takes them even further in the postseason this year.

“I like the chemistry of this year’s group. They respond to each other and talk to each other. It’s very nice to see that,” Parmer said. “Hopefully we learn from last year and it helps us this year. If we can make it back, which we think we have a shot to do that, then what we learned will help us.”