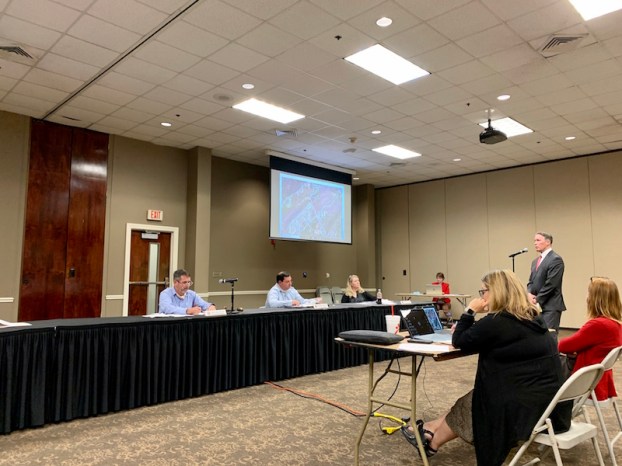 The Shelby County Planning Review Board met to hear an appeal in a case involving the Planning Commission’s approval of a rezoning request for the development of gas station and convenience store on property located near the intersection of Shelby County 52 and Shelby County 93. (Reporter Photo/Emily Sparacino)

Review Board hears appeal in rezoning case near 52-93 intersection

PELHAM – The Shelby County Planning Commission’s decision in September to approve a rezoning request for property located south of the intersection of Shelby County 52 and Shelby County 93 will stand following an appeal in the case.

The Shelby County Planning Review Board met Oct. 27 to hear an appeal from Wendy Brockway regarding the Planning Commission’s approval of a developer’s request to rezone about 17 acres of property from O-I (2) to B-1 to allow for the development of a gas station and convenience store.

The project plans call for the gas station and convenience store to be built on a roughly 4-acre portion of the property, located near the cities of Helena and Hoover.

The rezoning request was made by Royal Investment Group on behalf of property owner Westwinds Holdings LLC.

Donald Brockway spoke on behalf of his wife, the appellant in the case, and urged the Review Board to consider the Planning Commission’s decision in light of numerous residents’ concerns about traffic and safety issues in the area.

Bryan Pressnell with Pressnell Engineering, civil engineer for the project, said he has been in conversation with the Shelby County Highway Department since nearly a year ago about the intersection improvements taking place and having to wait until the work was finished to apply for access.

Pressnell said studies show convenience stores do not generate traffic, but are often placed on already busy roads to receive customers who are more likely to stop somewhere on their regular route.

Shelby County Engineer Randy Cole asked Brockway if he would feel better about the property rezoning if the 52-93 intersection were signalized, and Brockway said he would.

“We’re in the process of doing a signal warrant analysis on that intersection,” Cole said. “I will say the chances are pretty good that we’re going to come close to warranting a signal there. As soon as a signal is warranted, we’ll dive right into it.”

In addition, Cole said a site plan was not required for all 17 acres of the property because it was not a special district request; however, a site plan for the gas station development will be necessary before building permits are issued.

By NATHAN HOWELL | Special to the Reporter HELENA — As masks have become a necessity for daily life in... read more