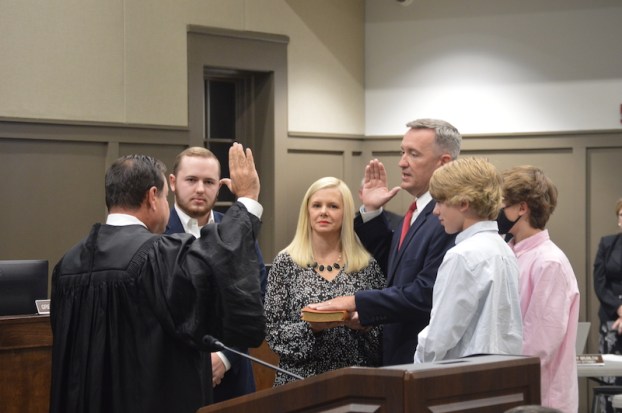 Scott Brakefield is sworn in as the next mayor of Alabaster after previously serving as council president. (For the Reporter/Donnamy Steele)

Brakefield served as a council member under previous mayor Marty Handlon for eight years before becoming mayor of Alabaster. Brakefield honored Handlon as well as Councilmember Russell Bedsole for their dedication and impact on the city.

As Bedsole goes to Montgomery to represent at a state level, Brakefield noted that he played an important role in the community.

“Russell was an integral part of our Council for many years,” Brakefield said. “He was really a strong advocate for our employees, was a driving force on our public safety committee, really pushed for our police station and all of the things that kind of went into that. He has been such an advocate for our employees, our city and we are going to miss him but we are so thankful that he is going to be representing us in the State House.”

Brakefield took time to note a number of contributions the previous mayor has made, as well as thanking Handlon for her service to the community.

“Mayor Marty, I can’t tell you how much I appreciate your leadership over the past eight years. You have done so much for our city and the statewide recognition for different innovations and work you’ve done, especially around mental health, has meant so much to this city,” Brakefield said. “Under your leadership we’ve received so many accolades for financial responsibility and it just goes back to you campaigning on a foundation and you sticking to that throughout your eight years. Your legacy to me will always be of fairness, an honest approach to things, and also just the investment you’ve had in hiring the right people and putting them in the right position because we do have some excellent department heads, and I think just about every one of them here tonight were hired under your leadership.”

One project that has been pushed by the Council and mayor is the contributions made toward the police station and department, which is an ongoing project, Brakefield said. “That investment in this community and in this area is going to further strengthen our definition of our art designation of a city center,” Brakefield said. “Through our chief financial officer, working with the Council, and having some very conservative budgets has allowed us to be in a very strong financial footing as we continue to move forward.”

Brakefield looks forward to serving the city as his first term as mayor of Alabaster begins. “We’ve accomplished a lot of things over the last 12 years, and I’ve served on Council for the last eight with you,” Brakefield said. “I promise we won’t burn the city down and tear it all up and we’ll do our best to keep it going, but I just wanted to take some time to make some comments and thank the Council, and I look forward to serving with you.”