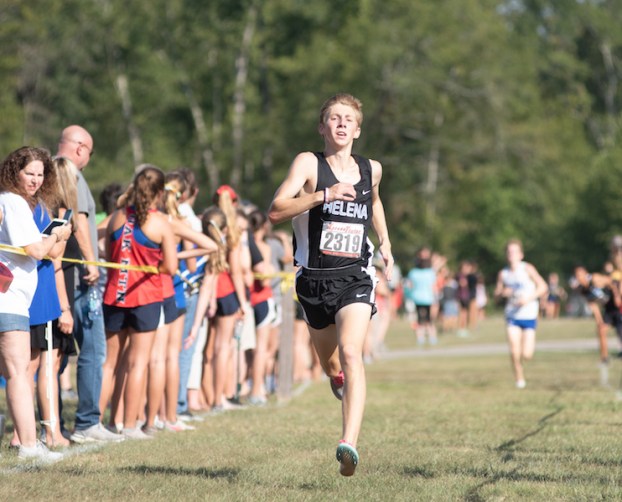 Brady Barton, above, won the Class 6A, Section 3 meet as part of a dominant showing from Helena’s boys to advance to state, while the girls will also advance. (File)

Local 6A runners perform well at sectionals, advance to state

With the pressure of a spot in the state championship on the line, several Class 6A cross country runners across the county came through in their section meets during the biggest moment of the season thus far on Thursday, Nov. 5.

Of the five teams from the 6A classification, Briarwood, Calera, Chelsea and Helena all advanced their entire teams to the state meet, while Pelham also had several of its boys and girls advance as well.

And the highlight at the 6A level for local teams continued to be the Helena Huskies and Chelsea Hornets thanks to Brady Barton, Cady McPhail and Miles Brush. The two have been finishing in the top two of seemingly every race down the stretch, and that remained the case in the Class 6A, Section 4 meet at Veterans Park in Hoover.

McPhail picked up her third win of the year in the girls race, all of which have come in her last four races with the other finish being second. She won the event with a time of 19:19.84

She helped the Chelsea girls finish third in the team standings, while Claire Neuberger and Ty Cason finished 18th and 19th, respectively, to finish in the top 20 as well.

The Briarwood girls finished one spot lower in the team standings in fourth thanks in large part to Mary Grace Parker, who finished fifth with a time of 20:20.03.

Pelham’s girls also qualified all of their runners from the event with Zitaly Pacheco leading the way behind a finish of 27th. Not far behind was Brooke Monti in 31st, while Gabrielle Bass, Annika Galloway, Emma Radford and Jackelin Ruiz also advanced.

In the boys’ Class 6A, Section 4 race, the same teams saw success, but in the team standings, Briarwood and Chelsea flipped spots. The Lions finished third this time around, while the Hornets finished fourth.

Chelsea still had the high individual finish with Brush finishing second thanks to a time of 16:11.48. His time was 12 seconds off the winning pace set by Homewood’s Crawford Hope, but was more than a minute faster than third place.

Two spots behind Brush was Briarwood’s high finisher in Trent Malloy, who has been a top-10 machine this year. Malloy finished the race with a time of 17:24.83.

Behind Brush, the next highest Chelsea finisher was Andrew Fielding in 16th, while Thomas Ludwig also finished in the top 20 with a finish of 19th. The Hornets got help from both Tucker Brown and Bay Brush in 24th and 28th, respectively.

Beyond that, Camden Thomas, Luke Price, Alex Davis, Joseph McGaha and Elijah Williams all finished in the top 40.

For Pelham, all three runners at the race advanced to the state meet as well with Thompson Gennari claiming 37th to lead the way and Ian Howell one spot behind in 38th. Evans Kahara finished 42nd to also advance.

The Helena Huskies and Calera Eagles also had impressive days competing at the Class 6A, Section 3 meet with both advancing their boys and girls to state.

Helena’s meet was highlighted by a dominant showing in the boys race, as the Huskies claimed the top four spots in the standings.

They were led by Brady Barton, who won the event with a time of 16:26.98, while Aspen Warren, Edan Jamieson and Jacob Stevenson all finished second through fourth.

Helena also got top 10 finishes from Braden Burch in sixth, Gage Pritchard in ninth and Barrett Draiss in 10th. Beyond that, Drew Cook and Trent Palladina finished 11th and 12th, respectively.

Calera also had a strong boys race with five runners in the top 20 and seven in the top 30 to finish second in the team standings.

Ethan Gray finished 22nd and Parker Rodgers 26th to close out a strong showing from the Eagles.

In the girls’ race, Northridge dominated the first few spots but Helena had several impressive finishes as well to claim second in the team standings.

Mallory Barton led the way with a finish of fifth behind a time of 21:01.82. Behind her, Madison Tsimpides, Lindsey May, Ashlynn Beery and Mallory Hamilton finished 10th through 13th, respectively.

Calera finished fourth in the standings as a team thanks in large part to Laryssa Molina-Becerra, who finished 14th. Isabella Jones added a top-30 finish of 27th to help as well.