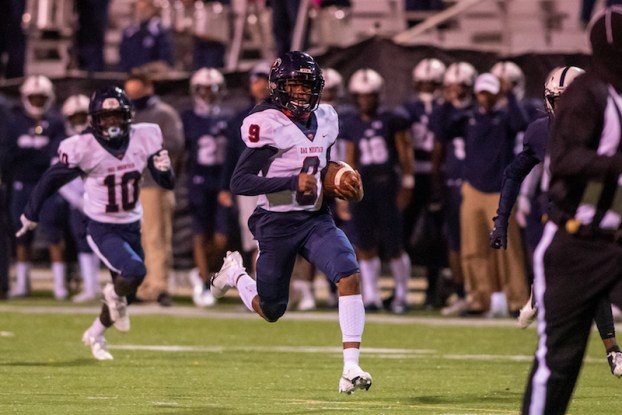 Oak Mountain quarterback Evan Smith had a big game to lift the Eagles to a first-round playoff upset of No. 9 Austin on Friday, Nov. 6. (File)

Smith, Oak Mountain come out on top in duel of electric QBs

By STEPHEN DAWKINS |Special to the Reporter

DECATUR – Oak Mountain’s football team overcame a slow start in a 41-28 win over Austin on Friday, Nov. 6, in the first round of the Class 7A state playoffs.

The win advances Oak Mountain to the second round of the playoffs for the first time since 2014 against Hoover on Nov. 13.

The Eagles (7-4) will hope for a faster start in that game, though they were able to climb out of a 14-0 hole against Austin.

Jevon Jackson returned the opening kickoff 95 yards for a touchdown, and then quarterback Quincy Crittendon scored on a 29-yard run to give Austin a two-touchdown lead with 6:11 remaining in the first quarter.

Oak Mountain got on the scoreboard on a 55-yard run by quarterback Evan Smith just seconds into the second quarter, and Smith’s score was just the beginning of a big quarter for OMHS, which saw them not just climb back into the game, but take over.

Before the teams headed into their locker rooms for halftime, the Eagles scored three more times: on a Judah Tait 28-yard run, a 1-yard run by Smith and a 37-yard field goal by Hogan Morton.

The Black Bears (8-3) pulled back to within one score of the lead on a 55-yard pass from Christopher Lyle to Crittendon with 2:34 on the clock in the third quarter, but the visitors closed the game strong.

Crittendon scored his third touchdown of the game with seconds left on the clock, but it was too little too late.

Oak Mountain did almost all of its damage on the ground. The Eagles rushed for 446 yards, led by Smith’s 23 carries for 320 yards and four touchdowns and Tait’s 115 yards and a score on 22 carries.

The Eagles will take on Hoover in the next round looking for redemption from a 42-7 loss earlier in the season with a trip to the semifinals on the line this time around.

By ALEC ETHEREDGE | Managing Editor  NORTH SHELBY – Trailing 14-3 at the half, the Briarwood Lions had given up... read more