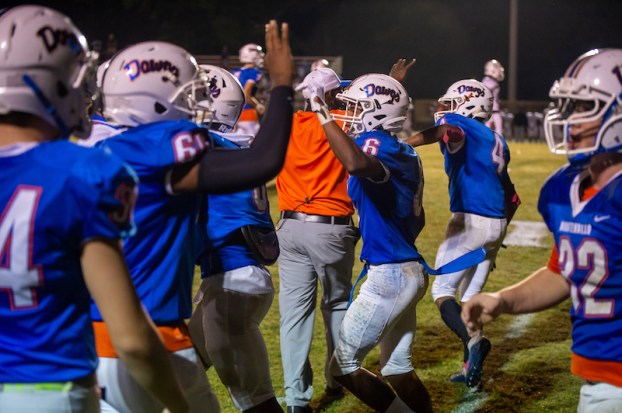 The Montevallo Bulldogs pulled off one of the biggest upsets on the state on Friday night, taking down St. James 27-21 in overtime for a playoff victory. (For the Reporter/Larry Dancy)

MONTGOMERY – In a wild season for the Montevallo Bulldogs, it only seemed right that it took overtime to win in the playoffs.

The Montevallo Bulldogs upset the St. James Trojans on the road in Montgomery, 27-21 in overtime on Friday, Nov. 6, to advance first-year head coach Blake Boren’s team to the next round of the AHSAA 4A Football Championship.

“When I took this job, I had coaches in the county tell us we’d be lucky if we won two games, so making the playoffs and advancing to the next round feels great,” Boren said. “We told [the team] when we got here this would be the biggest upset in the state of Alabama. We just had a tremendous amount of belief in our boys that they could get it done. This was the first game of the year that we put it together on offense, defense and making PATs.”

St. James entered the postseason 7-3 overall with all of their losses to ranked teams, but that didn’t deter Montevallo.

The Bulldogs opened the game with a nine-play drive that resulted in a 12-yard touchdown catch by junior receiver Kial Cottingham.

The Trojans responded, however, with a punch-in touchdown run by Cosner Harrison to knot the score at 7-7 at the end of the first period.

St. James took its firs lead toward the beginning of the second quarter with an 18-yard touchdown pass.

But on the last play of the half, Montevallo running back Joseph Anderson continued a remarkable season and tied up the game again at 14-14 with a 4-yard scoring run, which helped give Boren’s squad confidence going into the locker room.

“I told one of the coaches coming off at the half that we could win this thing,” Boren said. “We didn’t make any adjustments at the half. I’m really proud of our defense that handled so many shifts and movements, and we’re just improving every week.”

The lone score of the third quarter came on a Trojans rushing touchdown with less than a minute left in the period, giving St. James a 21-14 lead at the start of the fourth quarter.

But in the final frame, Anderson notched his second score of the game on a 12-yard run to even the score at 21.

When the Trojans got the ball back, Cottingham, one of the Bulldogs’ many two-way players, followed up a three-interception game in his last outing with another key interception to give Montevallo the ball with two minutes to go.

While the Bulldogs missed a 42-yard field goal as time expired to send the game to overtime, his interception prevented St. James from a game-winning drive.

Then, in overtime, the Montevallo defense stepped up again. St. James’ drive was stopped short of the goal line by Cole Dennis on fourth down to prevent a Trojans score, leaving it all up senior quarterback Jay Dreyer and the Montevallo offense to finish the job.

The shot-caller, who hadn’t played the position since middle school before starting his senior year, set up Anderson for a 4-yard touchdown run, the junior back’s third of the game to go with his 179 yards on 44 carries, to clinch the upset for the Bulldogs. Dreyer finished the game with 165 yards and one touchdown throw to Cottingham, who accounted for 162 of those yards.

Montevallo now advances to face Handley in the next round of the playoffs, and Boren intends to keep the momentum going by preparing his team mentally, but for now, the gravity of what has happened here is not lost on him.

“Any time you win is big. But anytime you win in the playoffs with a team no one said would be here is always special,” Boren said.

Never out of it: Helena scores 22 unanswered in wild playoff win

By GRAHAM BROOKS | Special to the Reporter HELENA – It’s been said for generations that the game of football... read more