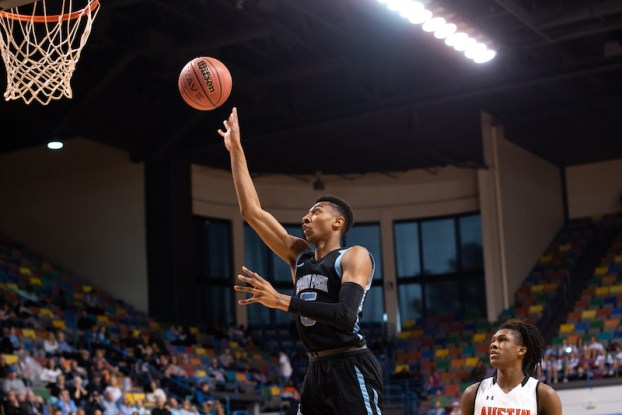 The Spain Park Jaguars will be led by Cam Crawford this season, as well as a strong group of other players fresh off an Elite Eight appearance last year. (File)

HOOVER – With Spain Park head coach Chris Laatsch unable to attend media days on Thursday, Nov. 5, the Spain Park Jaguars were represented by assistant coach and former Pelham head coach Joel Floyd, who hammered away that this year’s team will be ready for a special run.

Coming off an Elite Eight appearance last year in Laatsch’s second year at the helm, the Jags have plenty to be excited for with several returners back, including All-County player Cam Crawford.

Going into last year, the Jaguars had gone 12-43 combined the previous two seasons, but managed 20 wins last year and finished one win from the Final Four.

“We’re definitely excited about the opportunity to have a veteran, senior-laden team, but we’re taking it one day at a time trying to get better every day. Hopefully we’ll be able to learn through the process as we go,” Floyd said.

The Jaguars return a lot of starting experience, including every starter from last year’s run, and you can now add Floyd’s son, Blake Floyd, to that list.

Floyd has been a starter at Pelham for two years and was an All-County player himself last year.

Floyd put a lot of responsibility on his son as the point guard at Pelham, but says he’ll be able to pick his spots and be more methodical this year.

“It was a big transition for him,” Floyd said. “A lot was on his shoulders last two years and that won’t be the case this year. It’s a different role and it’s one that he’s looking forward to. Now he doesn’t have to force things and can pick and choose where he wants to attack and shoot.”

Both Floyds help take Pelham on a special trip to the Sweet 16 last year as well, which marked one of the coach’s best jobs in his career after the team battled through difficulties all season.

Crawford leads the returning starters at Spain Park this year, as he looks to help the Jags repeat another deep playoff run after leading the team with 11.3 points, 5.3 rebounds and 2.5 assists per game last year.

“Cam has a lot of experience, and he’s been on varsity for a long time,” Floyd said. “He’s so versatile, and he can kind of do a little bit of everything for us. He’s a terrific defender, can post up guys who are bigger than him and he’s just a difference maker out on the floor.”

Floyd and Laatsch will have a meeting of the minds as they look to mix their philosophies and improve upon Spain Park’s big jump from single digit wins in 2018 to Elite Eight last year.

“Coach Laatsch has a lot of experience, has won a lot of games and has a great system in place,” Floyd said. “From top to bottom, we have buy-in from everybody, and I’m just trying to add to that. I’m trying to add my insight and experience on things and (Laatsch) has been great about that.”

With so much experience back, players know the standard and what it will take to get back to the postseason.

“I think we all stepped up and came together as a team,” Josh Harrington said of last year’s success. “Our chemistry really picked up, we bonded and we were able to put together the good things and leave the bad things out.”

J.R. Lambert, who was another starter last year, added to that sentiment.

“We all bought in during the preseason, started working out harder and practicing harder than the year before,” Lambert said. “Our senior class was also a few of our hardest workers who pushed us and kind of established that culture we want to have this year.”

The Jaguars are dealing with expectations for the first time in a while, but Floyd and the players expressed confidence that they can bear those expectations and prove they’re worthy of them.

“It’ll definitely be different from the last year only winning seven games, but we’re going to have to play with a chip on our shoulders,” Lambert said. “When teams come to play us, we will have that respect, but teams will also bring their best against us.”

“It’s been a big thing for us in practice is to play to our standard,” Floyd said. “I’ve experienced in the past being on teams that people don’t think about to having a target on your back, it is different and that’s going to be something new these guys will have to experience.”

By SETH HAGAN | Special to the Reporter ALABASTER – When it comes to basketball, Class 7A is full of... read more