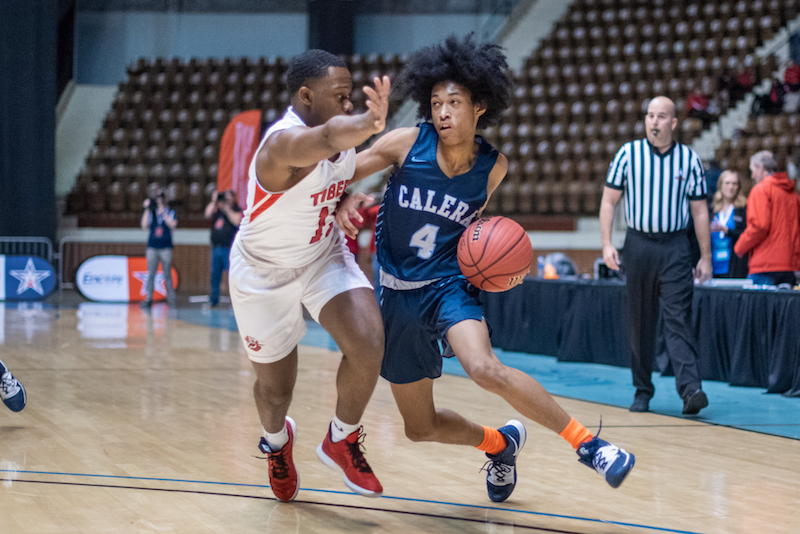 CALERA – It’s hard to believe George Drake is entering his eighth season as head coach of the Calera Eagles. It’s perhaps even more difficult to realize it’s been 15 years since he led Calera to the 2A state championship game.

Now a veteran coach, Drake’s teams have become known for their high-flying, fast-paced brand of basketball that has earned him respect throughout the state as Calera has been a fixture in the playoff picture. And he doesn’t anticipate that changing this year.

“We’re looking to keep that pedal smashed all the way down,” Drake said leading into the 2020-2021 basketball season. “We want to get up and down and play fast. We don’t want to take a step back, so we’re looking forward to getting after it.”

Calera is a veteran team as well with eight seniors dotting the roster, including All-County honorees Duke Chambers and Jordan Eggleston.

They’ll also return Keshawn Haynes and Isaiah Green as key leaders, and Drake acknowledged it will be difficult saying goodbye to this particular class when the season concludes.

“It’s bittersweet because on one hand you bring back a lot of experience but on the other hand it’s one and done for these guys,” he said. “They’ve been around the program, they’re dynamic players and awesome individuals. We just look forward to going out and leaving it all out there on the floor. They’ve been working hard this offseason and I know that with their leadership we’ll have a successful year.”

Drake returns one of the best point guards in the state in Chambers, who along with his senior teammates is focused on leaving a personal stamp on Calera basketball and the future of the program.

“I expect myself this year to get to that first team. I expect when I go out there to do more than I did last year,” Chambers said. “When I leave this school, I want to leave with a state championship, area championship, really every accomplishment I can get this year. I want to leave knowing I have a legacy.”

Eggleston, an All-County honorable mention, and Haynes echoed the sentiments of their point guard.

“Everybody wants to get to a state championship, but you’ve also got to leave an impression on the younger guys,” Eggleston said said. “There’s a lot of them coming up so you’ve got to get them ready for next year so they know the expectations.”

Last year, Chambers, Eggleston and Green all averaged double digits in scoring with Chambers averaging 14 points per game and the other two 10 points per game. Chambers also led the team with three assists and was second on the team to graduate Lapparis Whatley in both rebounding and steals.

In addition to those three, Haynes will be one of the team’s biggest leaders, and standing at 6-foot-3, 170 pounds, he’s also going to be an athletic force on the floor. But he’s mostly focused on the leadership role.

“We want to leave with a bang so we can pass the torch down to the younger guys so they can carry it,” Haynes said.

The team’s play on the court is always in the forefront of Drake’s mind, but in an offseason where in-person time with his team was limited, he had more personal time to focus on his circle and how to extend that to his players.

“I had a lot of time to spend with my family and that kind of changed the perspective for me a little bit,” he said. “Nine times out of 10 during that time I’m still in grind mode, but with COVID it slowed things down and I was able to have that time. The part where we got back to basketball, I started missing this family.

“We had to do some things that were virtual to make sure that family stayed together and intact. I definitely think it helped the collective unit to keep everything in perspective and now as things are trying to get back to normal I feel like no one takes a minute or second of practice for granted.”

The Eagles’ head honcho draws confidence in his team’s leadership and their future performance from a deep, personal connection with this senior class.

Other seniors include Derrick Edwards, Jamarius Ford, Rodriguez Smith and 6-foot-8 Trevon Stoutermire. In addition to that, some young players like Tyler Nelson, the football team’s quarterback, and others could play a role.

“I’ve got eight seniors, and I feel the same way about each of them and if I could’ve brought them all I would have,” Drake said. “You spend that much time with those guys and they’ve been in your program, you get an attachment with them.”

In year eight, Drake has elite talent in leadership positions and an experienced group fixated on the task at hand: another area title and a deeper dive into the waters of the postseason.