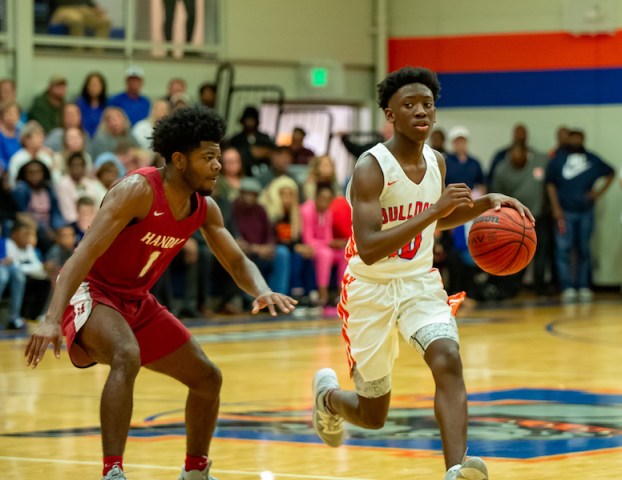 Michael Jones, above, will return to Montevallo this season after averaging 18.2 points per game last year to earn a spot on the All-County First Team and lead the Bulldogs to the Elite Eight. (File)

MONTEVALLO – A round of Shelby County basketball musical chairs landed Keegan Bell with the Montevallo Bulldogs in the offseason, and he now looks to carry the team’s momentum from a trip to the Elite Eight last year into his first season at the helm.

Bell has a strong background in basketball, which should help. His father, Dan, was a college head coach at Northwestern (La.) State and later coached Bell in high school at Bob Jones and Hazel Green.

Bell became one of the top prospects in the state and had his pick of Division I programs, but settled on Vanderbilt where he played for a year with fellow high school legend and Calera head coach George Drake.

Following a coaching change, Bell transferred a few miles south to UT-Chattanooga where he became the school’s all-time leader in assists in just three years.

Following a short stint playing pro ball in Iceland, Bell got the coaching itch, and after a few stops, he has landed in Shelby County ready for a new challenge.

Arriving in Montevallo in August, he had no time to waste, but he knows the possibility.

“We’ve been hitting the ground running as much as we can,” he said. “For me, I have a mentality of no whining, no complaining, no excuses. We’re going to get after it. I really like our team, we’re young, but we’ve got a lot of talent.”

And talent he has.

In the last couple of years, Montevallo has been able to lean on their size. All-County selections JaBrian Sullens and Jamarius Carter locked down the paint and gave the Bulldogs huge matchup problems for opponents, but now Bell must change their identity with those two moving on.

“We’re going to be a fun team to watch, we’re going to get up and down, and we’re going to guard,” Bell said. “Even though we’re small, I don’t think that matters. I’m big on rebounding, being tough and we’ve got several guys that can play multiple positions.”

The first-year coach believes in the spirit of competition and the familiarity his team has with one another.

“The best part about this group is they’re young but they’ve grown up together,” Bell said. “They get really competitive in practice, they’ll all be competing for playing time and we’re going to rotate some good players out there.”

The unquestioned team leader is new upperclassman and All-County first teamer Michael Jones, who led the county in scoring last year with 18.2 points per game, while also averaging 3.8 assists and 2.2 rebounds per game.

“Obviously we want to win a championship as a team, but I have some individual goals,” Jones said. “Make All-County again, try and win player of the year at least. This offseason I worked on getting stronger, faster, just putting in work in the gym.”

He is also a fan of his new coach and the way he sees the team respond.

“We’ve never competed like we are now in practice, I think it’s going to be special,” Jones said.

The Bulldogs will also return All-County honorable mention Kavounte Britton, one of the multi-position players Bell mentioned, who will help ease the transition and help bring along the younger guys on the team.

Bell did heavily emphasize, as a product of his upbringing, that no position is safe as he will constantly be analyzing his new players.

“I’ve told them from the day I stepped in here that I’m evaluating everything,” he said. “You’re going to earn every minute. Just because you start on Tuesday does not mean you’re going to start on Friday.”

The energy Keegan Bell exudes is something that will certainly galvanize his squad. With returning talent, extra potential amongst the ranks and help arriving from the football team in the coming weeks, Montevallo is an intriguing team that looks to be an exciting county program to keep a close eye on.

Chelsea to rely on new players during upcoming season

By SETH HAGAN | Special to the Reporter CHELSEA – Chelsea basketball is going through some growing pains heading into... read more