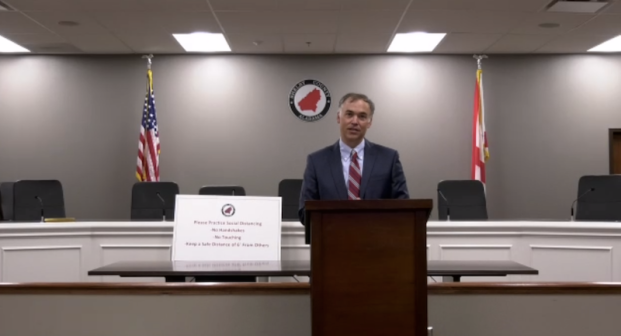 Shelby County Manager Chad Scroggins provided attendees of The Shelby County Chamber’s virtual State of the County presentation Nov. 10 with an overview of county happenings this year and projects slated for 2021.

In his first State of the County presentation, Scroggins started by reflecting on how the COVID-19 pandemic ushered in unprecedented changes for his staff, local businesses and the county’s nearly 218,000 residents in mid-March.

“It’s been a very unique year, obviously, to start off in this position with things that have occurred,” Scroggins said. “It’s been a challenge, but it’s also been an opportunity to step in with both feet and try to direct and lead our county government operations in a manner that we’re consistent and continuously able to serve all of our customers. I appreciate our staff most of all for what they have done through this pandemic.”

The pandemic’s effects were immediate and far-reaching, resulting in changes in operations, policies and procedures; concerns of staff or customer exposures; employment and economic development issues; and stresses on resources, Scroggins said.

The Shelby County Commission’s meetings in late February and early March before the pandemic shutdown saw the largest attendance because of the proposed Coosa River Express toll bridge project; however, the March 23 Commission meeting drew only 15 attendees, nine of whom were commissioners.

“I’m proud of our staff (and) everyone that we work with that made that happen,” he said. “Their dedication and perseverance through this global pandemic … I’m very proud of all that they have done. I can’t say enough about how our staff continued every day to return back to the office and figure out how we could continue to keep operations open.”

Other significant events in 2020 have included Hurricane Zeta, which caused damage and widespread power outages in Shelby County in late October; the largest presidential election in history in regards to voter numbers; and a new president and projected changes.

Scroggins said Shelby County had 99,264 voters who came out to the polls, plus nearly 18,000 voters who did absentee voting in advance of the General Election on Tuesday, Nov. 3.

The county has a total of about 165,000 voters, which means about 60 percent of voters showed up at the polls on Nov. 3, he added.

“I need to thank everyone who had a part in that,” Scroggins said, commending county staff, poll workers and inspectors and the probate judge’s office for their work before and on Election Day. “Typically, we only have about 3,500 ballots on the presidential election that are cast absentee, and this year to have 18,000, they had a significant outpouring of residents who wanted to have that opportunity to vote in advance.”

Regarding unemployment, Shelby County had a low unemployment rate of 1.8 percent at the end of 2019, but by April, the rate had jumped to 9.2 percent.

“That’s been the highest that we’ve experienced in years,” Scroggins said, noting the high rate reflects many service industries that had to shut down during the start of the pandemic. “Those numbers have gone down as businesses started to open back up, as we had social distancing practices that were being implemented in restaurants and other service industries.”

Scroggins said another consequence of the pandemic has been an increase in the average daily inmate population at the Shelby County Jail, noting the governor provided an order to all of the counties in March that the Department of Corrections would not take in any additional inmates who were charged, or those who were parole violators.

“After 30 days, someone that comes into the county jail that’s supposed to be going to the Department of Corrections transferred to a state facility. The governor’s order stopped that,” Scroggins said. “This is something that we are focusing on right now as your county government because our population is up to 550-560 inmates within our county jail. Our county jail is not designed to carry that many inmates. It is the state Department of Corrections’ responsibility to house their own inmates. It is a burden on us.”

Scroggins praised Shelby County Sheriff John Samaniego and his staff for managing the increase in inmates, all while mitigating the spread of COVID-19 in the jail.

Next, Scroggins detailed the county’s growth in 2020 through various numbers, such as population, property tax value and building permits.

Scroggins also compared the county’s budget numbers for Fiscal Year 2021 with those of 2020.

“The real estate market is as hot as it’s ever been in Shelby County,” Scroggins said. “This year, there’s an $18,000 jump in the median housing value.”

New capital projects and initiatives in 2021 include the return of the Park and Recreation Grant Funds, additional trails at Cahaba River Park, continued work to extend the Dunnavant Valley Greenway and the use of the RPCGB Apple Study process to explore sidewalk extension in Columbiana.

Looking forward to next year, Scroggins said the county will focus on the completion and startup of the new county services building; bringing the Community Development Block Grant Program to the county level; its comprehensive growth and development plan; and continued economic growth through the pandemic.

“We’re here for you, we’re here to serve you,” Scroggins said. “Thank you for supporting Shelby County. Let us know how we can support you and your businesses. We’re very proud of our county and everyone that makes our county a great place to live.”

By EMMA CAREY | Special to the Reporter Like most women, Jennifer Colwell visited her gynecologist for a yearly checkup... read more