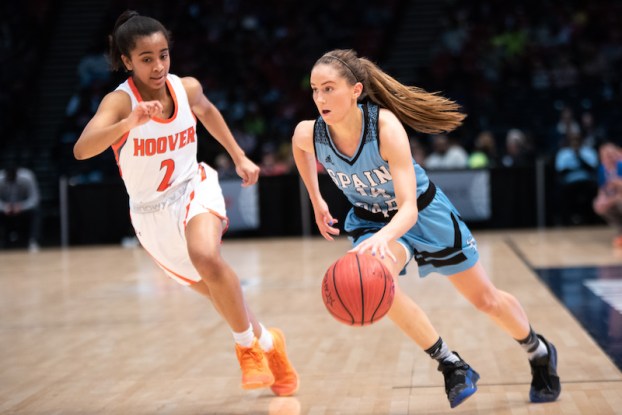 Spain Park senior Avery Masdon, above, will be one of the team's leaders this year as she looks to help the Jags repeat as Class 7A State Champions. (File)

Spain Park loses star, but still has hope of repeating

HOOVER – Coming off a spectacular run to the 2019-2020 Class 7A State Championship, their second in three years, the Spain Park Jaguars are excited for the opportunity ahead moving into the new basketball season, but one key piece will be missing—last year’s player of the year.

Now at the University of Georgia as a freshman, Sarah Ashlee Barker will be missed after averaging 23 points and 10 rebounds as a senior while also starting four consecutive years.

But to count the Jaguars out just because she is gone would be a mistake and it’s a challenge the team is facing head on.

“Yes, we know Sarah Ashlee has graduated from Spain Park. We thought about putting the basketball up and just quitting, but we took a vote and decided to move forward,” Spain Park head coach Mike Chase said sarcastically with a laugh ahead of the season.

And judging from the Jaguars’ 51-13 opening win against Tuscaloosa County, it looks like they made the right call.

While they lose the state’s best player, the Jags get back All-County Honorable Mention players Avery Masdon and Camille Chase. Masdon finished off last year strong with clutch play in the championship game, while Chase has been a part of the team since her freshman season and is coming off a difficult ACL tear to end last season.

With Barker now gone, both know the window is open for them to take over a leadership role.

“With Sarah Ashlee gone, taking on her talent and leadership, that’s been a big thing for me,” Masdon said. “Being the one that’s not always the nicest and laughs is different, but I need to take over that role and be that leader.

As one of three seniors alongside Stephanie Tooson and Jaycee Douglas, it’s a key position to be in for the point guard.

But she has plenty of help alongside her. Not only is Chase back as a sharp shooter and strong defender, like Masdon, but Tooson and Pooler can play big in the post or outside.

Beyond that, Katie Flannery, Mackenzie Culpepper, Haley Russell and others will play important roles this season.

And while the area they compete in will be difficult, the team is determined to make 2020 a special season for Chase’s 25th year as a head coach.

Their area features teams like Vestavia, who is trending upward, Gadsden City and Hewitt-Trussville.

“Our area is possibly the toughest area for 7A basketball,” Chase said. “I don’t think there is any doubt that if you look across the board, that there are really good basketball teams across our region just to get into the playoffs.”

And even though their leading scorer is gone, Chase feels confident that his team will be more difficult to guard this year because of how spread out the scoring will be.

“In 25 years, I’ve never really had a volume scorer like we had with Sarah Ashlee,” he said. “Most of the years I’ve coached, it’s been sharing the wealth. Who is going to have the matchup that night? This is more accustom to what I’ve had in the past.

“I think actually; it was easier to play against us last year than most of the teams I coached because people knew where it was going to come from.”

Chase also saw his younger players step up last year when Barker was out, starting in the season opener against Madison Academy when they led the team to victory and then again in the state championship when Barker fouled out with close to five minutes to play.

Avery started on varsity as point guard when she was ninth grade. Camille has been playing since she was four years old. Made a basket in 2018 state championship young.

“These other players stepped up and made big plays,” Chase said. “It wasn’t that they couldn’t do it. We just had a great option last year that we were going to play through.”

But now the entire team feels more confident and know the opportunity that is ahead.

“I never had a chance to really practice being dominant because (Barker) was so dominant,” Camille Chase said. “She was a good example for me and Avery. She was our coach within the team. Now we have me and Avery and a lot of our other players that are distributing that leadership evenly.”

The team knows in order to be the best this season, it’s going to start with matchups offensively and playing great on the defensive end of the floor.

Chase feels like he has the team that can create mismatches either around the perimeter or in the post, depending on the defense that is being played against them, and he knows he has the defense to be successful.

Masdon and Chase have both guarded some of the state’s best players in the past, including Masdon helping guard some of the best players late in the playoffs last year, which will help spark the team defensively this season.

And as always, the Jaguars will continue to shoot the ball heavily from beyond the arc.

But they’ll also have slightly more height than they have in the past. Sophomore Jordy Griggs stands at 6-foot-2 and can shoot the ball well and drive, while Pooler is 5-foot-10 and Russell and Flannery are both 5-foot-9.

“Can we play to our strengths to force the other team to take out a player because of a mismatch?” Chase asked. “That will be key to our success.”

By no means will it be easy for Spain Park to repeat this year with a difficult path, but with their head coach and several returnees, they have as good of a chance as anyone.