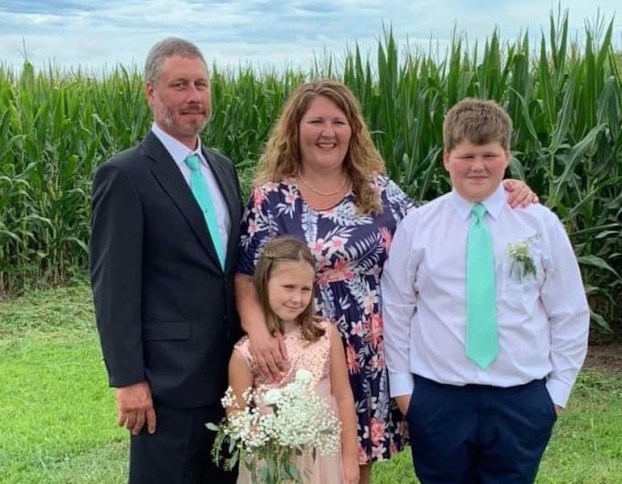 Jennifer Colwell, middle, stands with her family. Colwell was diagnosed with Stage 1 Breast Cancer at 37 years old after receiving a mammogram with no health problems or history of breast cancer in her family. (Contributed)

By EMMA CAREY | Special to the Reporter

Like most women, Jennifer Colwell visited her gynecologist for a yearly checkup as normal. At the appointment, the doctor mentioned that her insurance covers a yearly baseline mammogram at 35 years old. At only 35 years old and with no family history of breast cancer, she could have easily refused the screening.

Even though she works as a practice manager for Brookwood Baptist Health, Colwell decided that her health was worth the time it took to go to the preventative screening.

Colwell became very thankful she did after the results of the mammogram came back showing two benign spots in her breasts.

Because of this, Colwell returned every six months to monitor the spots. After two years of regular screenings, the mammogram showed a small cancerous spot.

In December 2019, Colwell was diagnosed with Stage 1 breast cancer at 37 years old. Colwell was faced with decisions about what to do after the diagnoses.

With the help of her doctor, Colwell decided to undergo a double mastectomy to ensure the cancer was completely removed.

“It was emotional,” Colwell said, as she held back tears. “It was an easy decision to make because I have two kids who are 12 and 8 years old. I want to be there for them as long as I can.”

As a wife and mom of two children, Colwell represents many women in her community. Her resilience in the face of cancer started with a willingness to be screened.

Because she chose to partake in preventative screenings, the doctor’s found the spots early in their development. Because of COVID-19, preventative cancer screenings plummeted drastically.

Dr. Daniel Allendorf, who serves as a member of Colwell’s medical team as a medical oncologist affiliate with Shelby Baptist Medical Center, said screening mammography was down between 40 and 50% since COVID-19 hit.

Other preventative screenings, like colonoscopies, were down a similar amount.

“That’s been unsettling to a lot of [doctors]. Just because there’s a pandemic doesn’t mean cancers aren’t present in people,” Allendorf said. “The way this could play out in a bad way is finding fewer breast cancers early—which is certainly an unintended consequence of the lockdown.”

Allendorf said local medical facilities are taking the pandemic very seriously and adhering to the CDC guidelines to ensure safety of the patients and limited exposure between one another.

“A lot of patients have uncertainty about what to expect now when they come to a clinic or hospital in the midst of this pandemic,” Allendorf said. “We’re all taking the pandemic very seriously, but the need for cancer screenings is as important now as it was a year ago.”

Colwell said she is so grateful she had the baseline mammogram done at 35 years old. If she would have waited, it could have been diagnosed at stage four.

She hopes at least one person would be empowered to get a mammogram because of her story.

“I want women to know that regardless if you have insurance or not, to go get a mammogram. It’s so important. I can’t stress that enough,” she said. “It’s painless and takes 10 minutes. It’s a very simple and easy thing to do, but it saves a life.”

By ANDREW SIMONSON | Special to the Reporter MONTGOMERY – In a wild season for the Montevallo Bulldogs, it only... read more