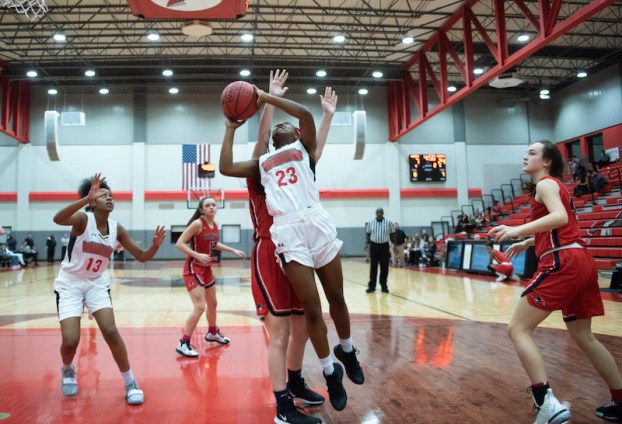 Alayah King will be one of three seniors on this year's team and will be a key leader for a team looking to advance to the Sweet 16. (File)

Thompson looks for special season in 2nd year under Smith

ALABASTER – There was a learning curve for the Thompson girls basketball team during Marty Smith’s first year at the helm, but heading into the 2020-2021 basketball season, the Warriors know what to expect and are ready to take the next step as a program.

Last year’s team finished 11-19 during Smith’s first year and had several difficult stretches of play, but they came within six points of advancing to the Sweet 16 after a 44-38 loss to Oak Mountain in the first round of the area tournament.

“We played Oak Mountain in our first area game and came up short,” said senior guard Lindsey Cook. “But last year, we had new expectations because of a new coach, and we had to figure those out. Even though we just came up short in the area tournament, we’re coming back stronger this season because of it.”

And after that loss to the Eagles in the area tournament, Smith finally saw what he needed to in order for this team to take the next step.

“Sometimes you have to know how to lose. After that loss, I saw dejection, hurt and pain,” Smith said. “I saw the eagerness to want to get back and win. It’s got to hurt to lose. After that, I saw these girls hurt for more than 32 minutes.”

That carried into the summer when Smith said he saw girls pushing each other along for the first time.

“If we had to go what we went through last February to take the next step, it was worth it,” Smith said.

With 10 players back on this year’s team that have experience, the Warriors not only enter the season holding each other accountable, but understand Smith’s coaching philosophy more and have the chance to build more continuity.

“We have to take our mistakes from last year. We just weren’t completely compatible with coach Smith yet,” Cook said. “This year, we know what his expectations are and what we need to do. As a senior, I need to lead and help everyone understand that.

“His style is more strategy, and last year we didn’t understand that. This year, we have to play the game slower and trust the strategy.”

Smith’s strategy is 32 minutes of Chaos and playing hard for the entire 32 minutes, and the coach has seen the improvement at playing that way in practice.

“This year’s group is starting to practice harder. It’s been harder than any point in time last year,” Smith said. “The other thing is that they aren’t scared. Go hard and if you mess up, then you mess up, but do it going hard. Let’s do it hard and together and that way we can overcome things together.”

And the team is becoming more used to that frame of mind.

“For us, we go 32 minutes of chaos and it looks crazy to everyone else, but it’s what we practice and we’re used to it.,” Cook said.

In addition to Cook, forward Malaysia Samuel will be back this season as a key player, while Alayah King, Alecia Reasor and Zyon Gaiters will all return valuable minutes in addition to several others.

King will play a new role this year as a vital scorer, while Reasor will handle more of a two-guard position this year and Gaiters will be a key at point guard after taking major steps.

Samuel will miss the first month of the season due to being in a boot, but when she returns, she’ll be a key addition.

And one of the players to put in the most work during the offseason was Arianna Smith, who didn’t get much playing time, but has worked to earn her share of minutes this season and could have a breakout year as a junior taking on a forward position.

“The trust is building, even down at the middle school,” Smith said. “You just see the growth in our program because we have confidence in each other and the girls are starting to buy into that.

The Warriors will need that confidence competing in an area with Hoover, Oak Mountain and Tuscaloosa County, but they’ll have a strong shot at advancing to the Sweet 16.