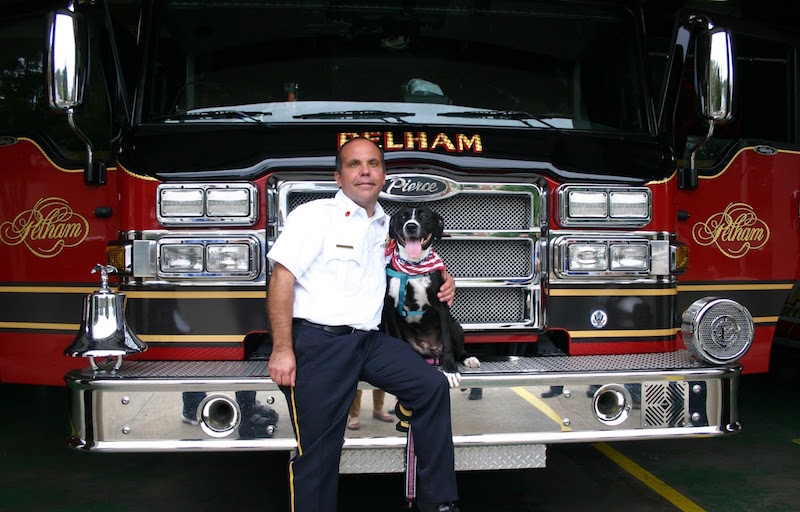 PELHAM — After months of planning and trying out different dogs, the Pelham Fire Department has a new 33-pound, four-legged employee, Ashly the Public Relations Fire Dog.

Through a partnership between PFD and Shelby Humane, Ashly was chosen to represent the department as a way to better connect with the community, provide valuable services and show the good that shelter dogs are able to provide.

According to Shelby Humane’s Leeangela Garate, she and Lead Event Volunteer Sandy Sims were working together on publicity ideas, and Sims pitched the idea of a fire dog.

“Sandy and I both went and met with chief (Tim) Honeycutt at the time, Lt. (Wes) Green, battalion chief (Danny) Reed and some other guys,” Garate said. “They were on board immediately, and frankly at the time were more interested in meeting the dog than hearing our pitch.”

The shelter went through several dogs throughout the process, as the animals need to be able to pass certain tests, such as a behavior evaluation, a car test and it needed to be able to get along with everyone and everything.

After all of these, the process finally led to Ashly, an 8-month-old All-American Dog according to the American Kennel Club.

“This is a public relations dog. It would be considered a working dog but not an arson dog or anything like that,” Garate explained. “It will go into schools and public events and be used as a way to bring the community together. She has already been taken to three schools, the schools got to name the dog. She went to one of the voting sites on election day.”

Another added benefit of Ashly, is the comfort that she is able to provide. While she is not an emotional support dog, as with all animals the presence of a friendly dog such as herself can provide comfort to those in distress such as children or the firefighters themselves.

“They see a lot of things that can be very disturbing and weigh on them,” Garate explains. “Dogs have been shown to lower blood pressure when they’re petted. She’s not an emotional support dog, but they have high hopes for her in really being able to be a dog for the community.”

Shelby Humane’s hope with this partnership is to show the extremely valuable services that shelter dogs are able to provide, and that this program could be expanded to departments throughout the different cities in Shelby County.

Greene will be Ashly’s main handler and will also help 9-1-1 dispatcher Laura Ehrhart, while she will be trained by Meredith Dempsey from Love Them Train Them.

“Lt. Green was very excited and extremely involved from the beginning and really quite open and supportive to everything,” Garate said.

Aside from going around town and visiting schools, Ashly is already taking her job in public relations seriously and has set up a dedicated Instagram account for those who are interested in keeping up with her. She can be found by searching @ashlythefiredog.