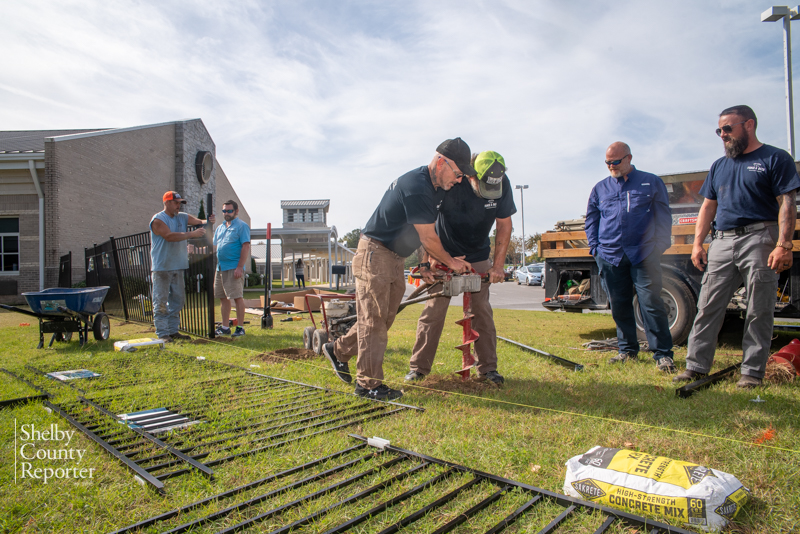 Helena Intermediate School recently had a new fence installed around the playground to help with safety precautions. (Reporter photo/Keith McCoy)

The effort was coordinated by Angela Smyly, a parent of a student at HIS, who was worried about the openness of the playground at the school being so close to the road.

After coordinating with school faculty, the project was able to find grant money from Lowe’s through their Heroes Project, which is designed to help local communities with projects. Local business Helena Deck and Fence donated their time and effort to help complete the project as well.

“I had expressed how worried I was about my son running around,” Smyly said. “I had brought this up before and everyone was in agreement when I would talk about it. So I reached out to Helena Fence and Deck who got back to me right away.”

Coordination began between Smyly, HIS staff, Helena Fence and Deck and Lowe’s after some meetings.

“The safety of our students was a concern. In the seven years I have been here at HIS, there has not been an accident,” HIS Principal Kathy Paiml said. “But we’ve had many balls roll over into the parking lot or onto the side street toward the buses. Now, we can be assured that our students will be safe.”

Paiml reached out to Lowe’s and wrote a letter expressing the need for the fence, which according to Steven Bell of Lowe’s, helped push the company to select the project for their program.

“Lowes has a lot charity outreach around the community. Knowing that history I knew exactly where and how to get what we needed,” Bell said. “We were able to accomplish it, with a nice letter from the principal. She was very convincing.”

The project saw employees from both Lowes and Helena Fence and Deck, according to Paiml, who provided time and labor to come out and install the fence.

Now that the fence has been installed Smyly says she feels much better about son and other children playing in the playground, and expressed that she and the school had gotten a lot of good feedback since it was installed.