Shaking it up at Hometown Nutrition 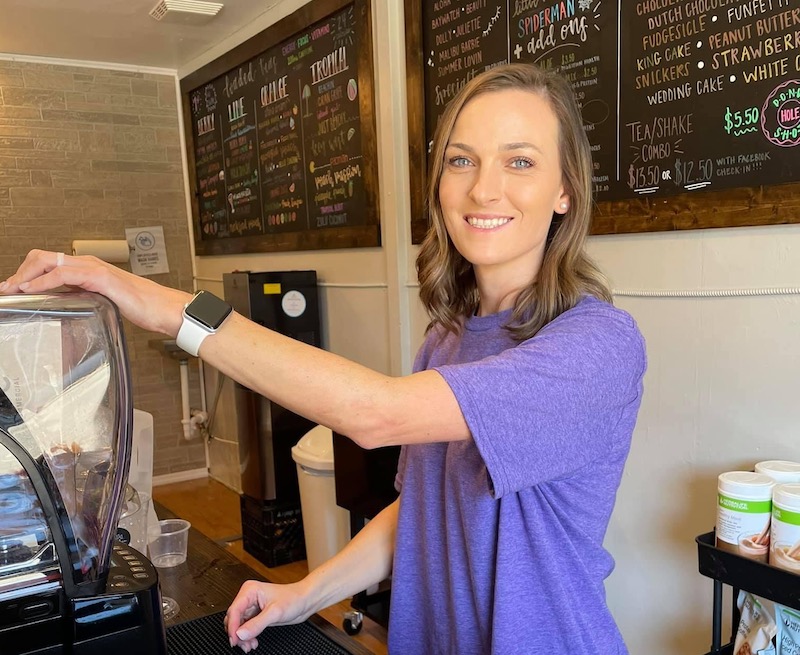 Rachel Dunnaway is serving up flavor and nutrition at her new Hometown Nutrition shake shop in Columbiana. (Contributed)

On the last day of October, a new business opened up in Columbiana. Rachel Dunnaway, the owner of Hometown Nutrition, had planned to open the day before, but the previous day’s storms brought a slight delay. By Halloween however, it was clear that the town needed an outlet, so she threw open the doors to her tea and shake shop, and she was welcomed with open arms.

Dunnaway, who lives in Wilsonville was introduced to fortified teas and other healthy drink options last spring through a similar shop called 4th and Inches in Chelsea. The more she learned and spent time there, the more she thought she would love to set up her own shop.

After months of looking around the 280 corridor for the perfect spot, and even having a name picked out, doors just kept closing.

Then just the right door opened up in Columbiana, and everything seemed to fall into place. “Sometimes God just works like that,” Dunnaway told us. “I’d prayed over it for a long time, and asked for direction.”

Once she got to Columbiana, the name she’d previously chosen just didn’t fit anymore. Dunnaway and her husband Jason had both grown up in the area and were both graduates of Shelby County High School. This area was home, and where they had decided to keep their roots as they raise a family of three. “We decided to call it Hometown Nutrition. It just made sense,” she told us.

Dunnaway has always considered herself an entrepreneur. She has a background in real estate and her husband, and electrician, jumps in along with her mom, to help as often as possible. And she has needed it. The response has been overwhelming right out of the gate.

When you see their menu you’ll know why.

Hometown Nutrition has a huge list of teas, coffees, and shakes that serve all kinds of health purposes. Whether you need a little extra focus or a shot of afternoon energy, they can help you pick just the right formula and make it taste amazing.

They also offer healthy meal replacement shakes in a long list of flavors like brownie batter, white chocolate snickers, and cheesecake to name just a few. She’s been pleased with the response from her customers in her first week of business, and her customers seem to be just as pleased with her based on the number of folks buzzing about it on social media around town.

Hometown Nutrition is right in the heart of Columbiana’s historic Main Street with a window front space inside the Shops of Columbiana. They are open early for the breakfast crowd and closes at 4 p.m. on weekdays. They are open 9 a.m. to 2 p.m. on Saturdays.