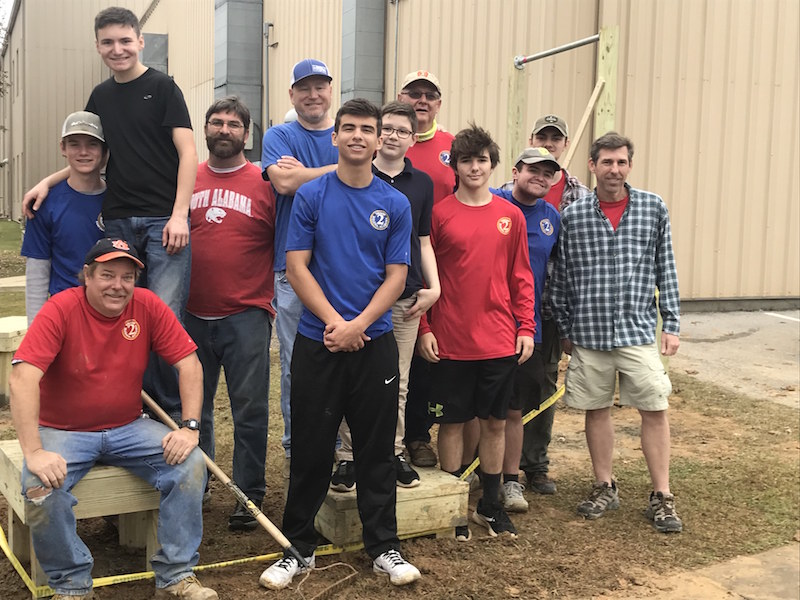 Helena’s Kyle Tolbert built an outdoor exercise area at the Alabaster YMCA as part of his Eagle Scout Project. (Contributed)

After years of working toward his goal, Kyle Tolbert has completed his Eagle Scout project. Tolbert is a junior and varsity football player at Helena High School.

His Eagle project was inspired by his passion for football and exercising, Tolbert said. Tolbert admitted that he was not too interested in scouts when he first joined.

After spending years alongside his brother and father, he decided to complete his Eagle Scout project.

“Originally, I was not the biggest person into scouts,” Tolbert said. “My brother was in Cub Scouts before me and when he was older in Eagle, my dad was a leader. A group of friends started with me, and when I got older I reached over to troop 2.

“When I was in the seventh or eighth grade my brother completed his Eagle Scout. My dad had told me that once my brother got his I could quit, because I wasn’t too driven originally. I only had two more ranks to go and he said, ‘I’m not going to let you quit since you put so much work into this already. You should keep going.’ Fast forward to now, I just completed my Eagle project.”

The project is an outdoors exercise area that Tolbert built alongside his troop at the Alabaster YMCA. This project was exciting to Tolbert because, as a football player, he enjoys working out.

“I built a pullup and dip bar combination with a box jump and a bench so that people at the Y can work out with it,” Tolbert said. “If they want to work out with it they can, and they don’t have to be inside to work out and it is meant to stay there for years.”

As this chapter closes for Tolbert, his gratitude toward his troop and father are evident.

“Basically everything I can probably say is credited to my father. He is always pushing me, and he won’t tell me I did something good if I didn’t do anything,” Tolbert said. “He isn’t into participation and he doesn’t give out participation trophies. He is about the work and he was my rock to tell me what to do, so I grant a lot of what I did for my Eagle to him and the amazing guys that came to help me. My fellow scouts and leaders have helped me be a better person, and I personally believe that Troop 2 is the best troop in Helena and in Alabama.”

Tolbert’s father and scout master, Lane Tolbert, expressed his pride in Tolbert and the rest of Troop 2.

“We had to work around football too to do this and be in the playoffs. There aren’t too many football players doing Eagle Scouts, so I’m proud of him,” Lane Tolbert said. “We had seven more Eagle Scouts from Troop 2 in 2020: Alex Angle, Joey Crain, Matthew Hartley, Nicholas Hohnstein, Chandler Mayo, Aaron Surcouf and Shawn Winn. We also had Justin Palm awarded Eagle Scout of the year by the Shelby County American Legion.”