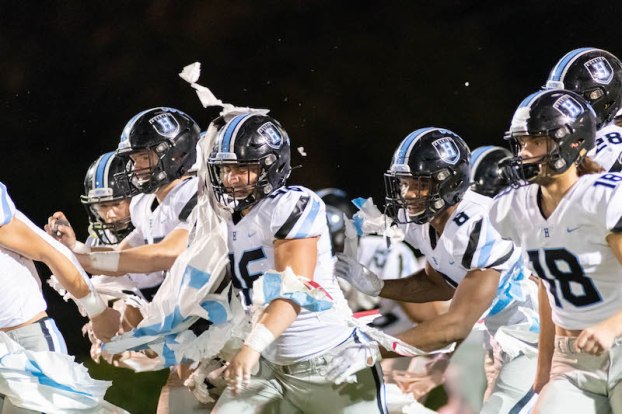 The Helena Huskies couldn't keep pace with Spanish Fort in a second-round playoff game on Friday, Nov. 13, as the Toros pulled away for a 40-7 win to end the Huskies' season. (File)

Huskies fall at Spanish Fort in second round of playoffs

SPANISH FORT – The Helena football team’s season ended with a 40-7 loss at Spanish Fort on Friday, Nov. 13, but it will still be remembered as a season that the Huskies advanced to the second round of the state playoffs for just the second time in school history, and the  first time since 2015, which was the second year Helena fielded a team.

The accomplishment was even more impressive given the loss of 30 seniors from the 2019 squad that earned a playoff berth. Then this year’s team raised the bar again, in Coach Richie Busby’s third season.

Of course, 2020 will also be remembered as the season of COVID-19, and the virus forced Helena to forfeit two games in the middle of the season, and benefit from an opponent forfeit, in three consecutive games.

But the Huskies (7-5) rebounded from that stretch to win four straight, including 22-19 over Carver-Montgomery in the first round of the playoffs the previous week.

Helena, who had become known as a second-half comeback team, fell behind 33-0 in Friday’s game at Spanish Fort before the visitors were able to get on the scoreboard, on a run by senior Kobe Hughes. But this time, the deficit was too much.

Spanish Fort scored first with 6:12 left in the opening quarter to take a 7-0 lead and made it 14-0 at the end of the first quarter.

That didn’t seem daunting at the time, as the Huskies had faced first-half deficits all season, but the Toros put 13 more points on the board in the second quarter to make it 27-0 at the half. Then, when they scored on the opening drive of the second half to make it 33-0, they were able to put it away, as Helena had no answer.

The Huskies season came to an end, but they will return several players next year after being forced to start young players throughout the 2020 season.

With the win, the Toros advanced to the quarterfinals of the Class 6A playoffs where they’ll take on Blount.

By ALEC ETHEREDGE | Managing Editor HELENA – With several stars out due to both football teams still in the... read more