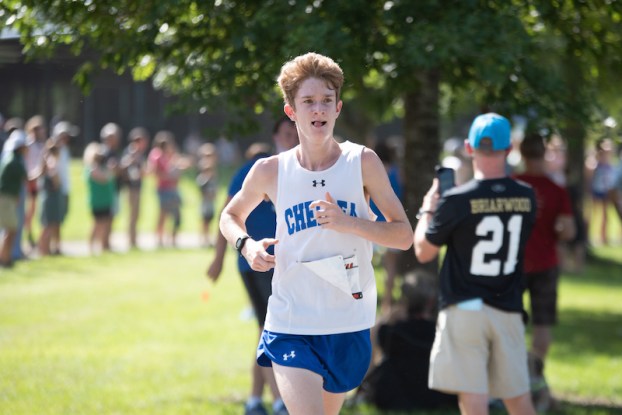 OAKVILLE – After finishing 16th in last year’s Class 6A state championship race, Miles Brush entered the 2020 edition of the event with much higher expectations.

Coming into the race with three wins in his last four events and top-two finishes in all four, Brush quickly became a favorite to compete for the state title, and the Chelsea junior put together one of his best races of the season to back it up.

Running his second fastest race of the season and finishing just four seconds off of his personal record set earlier in the season, Brush claimed the 2020 Class 6A Cross Country State Championship after finishing the race 22 seconds faster than second place.

He ran the race in 15:21.41 to claim the title, beating the best runners in the state. Last year, Brush finished no higher than second in any race and only had five top-10 finishes in 11 races.

This year, Brush finished inside the top 10 of every race, including six top-five finishes in seven races. He never finished lower than seven and ran five of his races in less than 16 minutes, while also winning the Warrior 2-mile Invitational.

The state championship capped off a special season and now has Brush as one of the state’s top runners.

Barton, who was one of the top runners in the state this season, finished sixth in the boys race with a time of 16:04.70 to close out a special senior season and career. Barton finished inside the top 10 of all but one race this season and had three victories.

In the girls race, Briarwood’s Mary Grace Parker, an eighth grader, and Chelsea sophomore Cady McPhail both finished inside the top 10.

Parker ran the event in 19:26.45 to finish fifth and set a new personal record in the process. McPhail, who entered the race with three wins in her last four races and four consecutive top-two finishes, finished 10th in the state championship race with a time of 19:44.79.

Outside of the top-10 finishers, Briarwood’s Joseph Bell had the next highest finish of all local runners taking home 17th in the boys race behind a time of 17:04.90.

Helena’s Edan Jamieson also finished inside the top 40. Running the event in 17:28.74, he finished one spot behind Thornton in 32nd as the only other runner for the Huskies to finish inside the top 50.

For the Chelsea Hornets, Andrew Fielding added a top-50 finish as well. The junior finished the race in 44th behind a time of 17:37.73.

Calera’s Riley Gay was the highest finisher for the Eagles in the boys race with a time of 18:23.97, which earned him 88th.

In the overall team standings, the Briarwood boys finished fifth, while Chelsea and Helena claimed seventh and eighth, respectively.

Pelham’s Brooke Monti also finished inside the top 50 to cap off a strong season, as the senior finished 45th with a time of 21:25.96.

Mallory Barton of Helena was the highest finisher for the Huskies. The sophomore ran the race in 21:57.01, which earned her a finish of 66th in the standings.

The highest Calera finisher was Laryssa Molina-Becerra in 140th behind a time of 24:05.07.