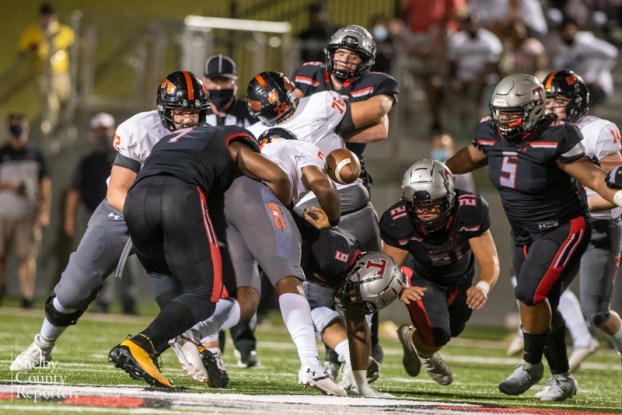 Thompson will take on Hoover this Friday night in the semifinals of the Class 7A playoffs, as the Warriors look to get back to the state championship game for the third year in a row. (File)

Thompson, Hoover set to battle for spot in state championship

For the fourth consecutive season, the Thompson Warriors will meet the Hoover Buccaneers in the Class 7A semifinals with a spot in the state championship game on the line.

For the Warriors, who are looking to advance to the state title game for the third year in a row, this is a moment they’ve been looking forward to all season as the defending state champs. In order to have a chance at defending the 2019 title, Thompson will now have to take down the Bucs for the fifth consecutive time.

That’s a remarkable opportunity for a team that was 0-10 at the end of the 2014 season and had never beaten Hoover going into the 2017 season.

But now, the Warriors have won five of the last seven games played between the two, including a 39-23 win a few weeks ago and the last two years in the semifinals.

With the two teams a combined 23-1 this season, 12-0 for Thompson and 11-1 for Hoover, a spot in the state championship game, however, won’t come easily for either.

In this rivalry, we’ve now come to expect tight battles between two of the state’s best teams, and that should be no different in this semifinal matchup with the two ranked No. 1 and No. 2 in the standings.

But for Hoover to have a chance, the Bucs are going to not only have to make a 16-point turnaround from the first matchup between the two teams on Oct. 23, but they’ll have to hope they are fully healthy after dealing with COVID-19 and injuries in their program during last week’s win against Oak Mountain.

The Bucs were barely able to squeak by Oak Mountain 24-21, and it took a questionable late fourth-and-inches stop in Hoover territory to keep the Eagles from at least tying the game.

Hoover, however, is a team loaded with talent that is two deep and expects to be able to bounce back this week, especially with an experienced head coach in Josh Niblett leading the way.

It’s also a team that will be plenty motivated after losing the last four in a row in this matchup with Thompson being the road block keeping them from the championship game the last two years.

While the Warriors have to be cautious of a loss against an elite football team, this is the first time during the last few years that Thompson just feels like the better team.

Normally, this matchup comes with question marks and the game being a tossup for whoever plays better, but this time around, with Thompson’s track record this season, the Warriors look like the better team.

In the first matchup between the two, Thompson played perhaps its worst game of the season, but still won by 16 points. The Warriors fell behind 10-7 in the game after junior quarterback Conner Harrell threw his first two interceptions of the season, but they scored 19 unanswered to take control from there, and the game never seemed in question the rest of the way.

Thompson lost the turnover battle 3-1 and had 10 penalties for close to 100 yards, but the Warriors still pulled away.

That was largely because of Harrell settling in offensively to finish the game with 301 yards passing and two touchdowns, completing 28 of 34 passes, while the defense was lights out.

Perhaps the biggest key in that win, and what will possibly be big again in the semifinals, was the defense getting off the field on third down.

The Warriors only allowed Hoover to convert four of 12 third downs in the game, while Thompson was 8-for-11 at converting third downs on offense.

If the defense can make big plays on third down again, it gives the ball right back to the state’s best offense, which will help Thompson have a chance to pull away.

The Warriors are scoring 43.6 points per game and have scored 42 or more in seven of their 12 games this season and 31 or more in every game.

With the defense giving up just 15 points per game, and currently playing its best football of the season, if Thompson can get to 35 points, which seems likely, it’s tough to see Hoover’s offense matching that total against this dynamic defense.

Looking across the board, running back Jarrett Crockett is healthy and has rushed for more than 100 yards the last few weeks in a row, while Ryan Peppins, J.B. Mitchell, Sam Reynolds and Tre Roberson add major threats at receiver.

There are so many players you have to prepare to shut down as a defense, that being successful in doing so at the high school level is extremely difficult.

Hoover is giving up 18.8 points per game defensively and will present challenges. But as we saw in the first game, even forcing three turnovers wasn’t enough.

Everything points to Thompson winning and advancing to the state championship game for the third consecutive year, but those are the games you have to worry about.

But predicting this game, you can’t go against the Warriors, who are motivated to get back to the state championship and know the effort it will take to do so.