Chelsea girls pick up win in county battle with Calera 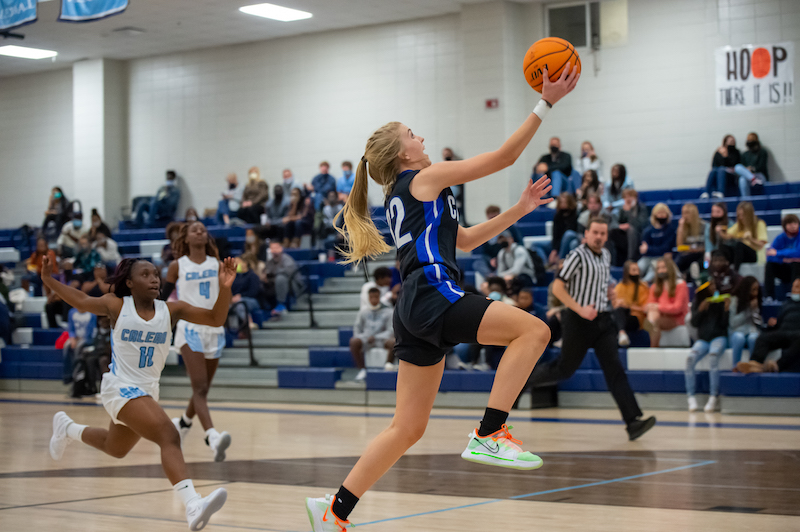 The Chelsea Hornets played a stellar defensive game against Calera on Tuesday, Nov. 17, to pick up a dominant 52-8 win. (For the Reporter/Larry Dancy)

CALERA – The Chelsea girls basketball team was able to even its record at 2-2 on Tuesday, Nov. 17, thanks to a dominant effort against county foe Calera.

The Hornets went on the road and held the Eagles to just eight points in the entire game, while the offense scored 52 to pick up a convincing second win of the season by a final of 52-8.

The path to that dominant win started in the opening quarter when the Hornets put together an almost perfect first period of the game.

On the offensive end of the floor, they put up 19 points and went 9-1 from the free throw line, while six different players scored in the frame.

Defensively, Chelsea only gave up one field goal while Calera was 0-2 from the free throw line, which led to a 19-2 lead for the Hornets out of the gate.

The offense slowed down a bit in the second quarter, but the defense put together a lockdown effort that resulted in a shutout in the period.

On the other end of the floor, they still put up 11 points from four different scorers as the balanced attack and defensive effort led to a 30-2 halftime lead.

Out of the break, Chelsea’s offense was still cool, but the Hornets’ defense continued its special night.

The Hornets came out and allowed one field goal or less for the third quarter in a row, giving up just one 3-pointer, while the Eagles added one free throw to post four points in the quarter.

With Chelsea’s eight points on the other end of the floor, the Hornets had extended their lead to 38-6 heading to the final quarter of play.

And in that final quarter, the success continued. Chelsea scored 14 points on the offensive end with Ellen Fleming scoring four points and Mary Cartee five points in the quarter.

The Hornets also only gave up one more field goal to finish off the impressive 52-8 victory.

Ashley Washington led Chelsea with 10 points in the win, while several others had big contributions. Fleming added nine points, while Sophia Brown posted eight. Behind that, Cartee and Mackenzie Titus both added seven points.