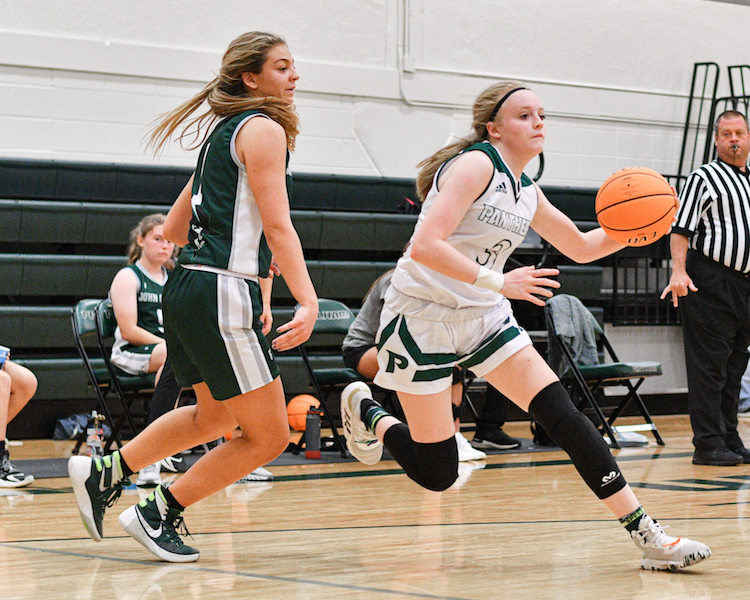 Pelham's Laci Gogan, above, posted 29 points to help the Panthers take down Sylacauga 68-22. (For the Reporter/Jeremy Raines)

SYLACAUGA – The Pelham girls basketball team improved to 3-0 to remain unbeaten on the season with a 68-22 road victory against the Sylacauga Aggies on Tuesday, Nov. 17.

The Panthers got 29 points and seven rebounds from Laci Gogan to help pave the way to victory, while teammates Myriah Tate and Victoria West each added 12 points with West adding in 10 rebounds for a double-double.

Tate was also big on the defensive end thanks to seven steals, which combined with the strong rebounding from the team, was big in limiting the Aggies to eight points or less in every quarter and just 22 points for the game.

Pelham started the game with back-to-back 19-point quarters on the offensive end of the floor, which began in the opening quarter thanks to four made 3-pointers, two each from Gogan and West.

Those two combined for 17 of the 19 points in the quarter, while the defense only gave up eight points on three made field goals and two free throws in the period.

That effort on the defensive end carried into the second quarter as the Panthers gave up just four points in the period.

In addition to that strong play, Gogan also came out on fire in the quarter. She posted 11 of the team’s 19 points in the frame, while Tate added six of her 12 in the quarter, which helped the Panthers take a 38-12 lead at the half.

In the first half, Pelham was a strong 7-8 from the free throw line, and that was something that was big again in the third quarter, as the Panthers knocked down all four of their free throws to open the second half.

Pelham also got eight field goals in addition to that, as the Panthers put together their best offensive quarter of the game with 21 points.

They also gave up just six on the defensive end of the floor to take a commanding 59-18 advantage into the fourth period.

During the final quarter, the Panthers had their lowest output of the game, but they still scored nine points and didn’t give up a field goal on the other end, while limiting the Aggies to just four points all on free throws.

In addition to the impressive play from Gogan, Tate and West, Katlyn Hollingsworth added nine points in a strong effort as well.