The American Legion is known for its service to the community, for the services it provides for its brethren. “Veteran’s Helping Veterans” is the motto you will hear repeated often by the members of Post 131 in Columbiana.  From providing breakfast for veterans at Jack’s the Saturday before Veterans Day, to pulling together a plan to begin providing scholarships for local school seniors, the men and women in this organization go above and beyond their motto.

Recently, Preston Bell, the posts Sergeant at Arms, began to think about the flags they place in local cemeteries to honor the men and women that have passed on before them on Memorial Day and Veterans Day.  It occurred to him that it would be great if they could honor living veterans in a similar way. 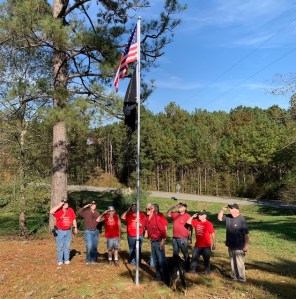 On Nov. 14, members of Columbiana’s American Legion Post erected a flag to honor veteran brothers Sam and Ray Payne for their service at their home. (Contributed)

With that thought, he began rallying members and locals to donate funds to provide at least half a dozen local veterans with full-size flag poles with not only American flags but also either an M.I.A. or P.O.W.  on their property that would be lit.

“I just think we should honor not only the dead but the living,” Bell said.

On Saturday, Nov. 14, eight members of Post 131, as well as one member of their auxiliary, met between the homes of veteran brothers, Ray and Sam Payne on Shelby County 97 in Columbiana to install the first of those flags. Sam Payne served in both Korea and Vietnam with a career spanning 20 years in the Army, while his brother Ray served in the Navy from 1957 to 1961.

After the pole was installed and the flags were flying, each member took their time talking with each of the brothers, and expressing their gratitude to their brothers in arms for their service. There was an air of respect, deep gratitude and brotherhood among those in attendance. More than one gentleman was seen wiping a tear from their face on this afternoon, as they contemplated the sacrifices that each of the brothers made during their time of service.

Member Tom Barnes told us, “Very often these guys just need an ear that will listen on hard days.” He went on to tell us how the ultimate mission of the Legion is not only to help fill material needs but emotional ones too. Having a community makes a difference for so many of these men.

The Columbiana American Legion has been steadily growing for a couple of years now. As they grow, the good they are able to do in the community grows as well. Aside from the main part of the post membership, they have also expanded to include a bikers membership as well as an auxiliary membership for family members of veterans. If you’d like to know more about joining Post 131, you can reach out to Tom Barnes at 205-337-6156.

A voice of encouragement