Hockney exhibit on display through Dec. 1 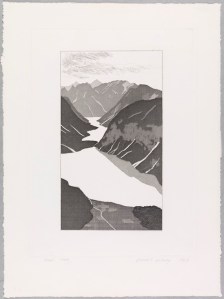 In 1970 David Hockney and Petersburg Press released Six Fairy Tales, a compilation of 39 etchings and the texts of Jacob and Wilhelm Grimm’s fairy tales, including: The Little Sea Hare, Fundevogel, Rapunzel, The Boy Who Left Home to Learn Fear, Old Rinkrank and Rumpelstilzchen.

Hockney had always loved Grimm’s Fairy Tales and had read all 220 of them. He also admired earlier illustrations to them by Arthur Rackham and Edmund Dulac. In 1969, he decided to make his own images. Rather than illustrating the stories literally, he chose vivid images to encapsulate a mood or detail. He especially enjoyed the elements of magic in the tales, and his images focus on his imaginative response to the descriptions in the text rather than attempting to concentrate on the most important events in the narrative. They are more than simply illustrations: they stand on their own as images, independent of the stories.

The tales are drawn from centuries of folklore. As Hockney points out: “The stories weren’t written by the Brothers Grimm…they came across this woman called Catherina Dorothea Viehmann, who told 20 stories to them in this simple language, and they were so moved by them that they wrote them down word for word as she spoke.”

The 39 etchings were drawn directly onto copper plates by Hockney between May and November 1969. It was a decade in which etching featured strongly for Hockney. As well as Grimms’ Fairy Tales, he made two other important series: A Rake’s Progress (1961-63) and Illustrations for Thirteen Poems for CP Cavafy (1966).

Organized by Landau Traveling Exhibitions of Los Angeles, this exhibition will tour museums throughout the U.S.

Gallery hours are Monday through Thursday from 10 a.m.-5 p.m. and during special events. The Shelby County Arts Center is located at 105 W. College St., Columbiana.

Lindsay Dyess writes and works for the Shelby County Arts Council and can be reached at lindsay@shelbycountyartscouncil.com.