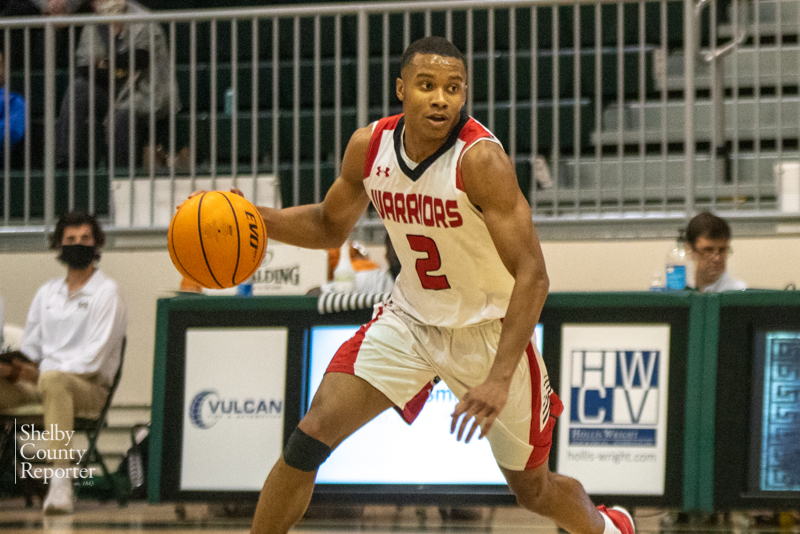 Grant Hopkins scored 25 points to help Thompson pull away from Woodlawn for the Warriors’ first win of the 2020 season. (Reporter photo/Keith McCoy)

ALABASTER – Dru Powell and the Thompson Warriors picked up their first win of the season on Tuesday, Nov. 17 with a hard-fought battle against the visiting Woodlawn Colonels.

The two teams played a close game in the first half, but Thompson was able to pull away with the three ball and good team basketball in the second half for a 67-54 win in their home opener.

It was a back-and-forth affair in the first couple of quarters including a high-scoring opening period. Thompson’s senior point guard Grant Hopkins took charge from the onset dropping 10 points in the first quarter with a couple of triples from the outside.

The Warriors never led by more than four points and the Colonels even took a brief 17-16, lead as they found most of their points in the paint. Hopkins’ second 3-pointer gave Thompson back the lead, and the Warriors led 21-17 after one.

Woodlawn continued to push in the second quarter and retook the lead 26-25 on the strength of a 9-2 run. The Colonels’ zone defense pushed the Warriors to the perimeter on offense, as Woodlawn shut down drives into the post.

Thompson once again countered from long range as Jack Dolorek got the Warriors going with a 3-pointer followed by two more from Hopkins.

Hopkins was dared multiple times to shoot from the outside and was more than happy to take the open looks. Up 36-31 with a chance for the final basket, Hopkins lost the handle on the ball just past midcourt and turned it over near the end of the half.

However, Woodlawn wasn’t able to take advantage, missing a couple of easy looks near the basket, and Thompson regained possession with seconds left.

Hopkins snatched the ball and raced up the court, heaving a desperation shot as time expired, but was fouled on the attempt giving him three free throws to close the half.

The senior made all of them to finish with 19 first-half points and give the Warriors a 39-31 lead at halftime.

Woodlawn refused to go away, initially ripping off six straight points to draw back within two at 39-37 to start the second half. Then, Thompson responded with a 14-2 run as Brad Lewis got involved scoring in the paint and getting to the charity stripe.

The Colonels, on the other hand, started to unravel on offense with several unforced turnovers. Thompson took full advantage and the spurt gave them a double digit lead they didn’t relinquish the rest of the way.

Saddled with early foul trouble, Wesley Roberson came back to have a solid second half, scoring eight points including a couple threes to give him 12 points for the game.

Hopkins led all scorers with 25 points, while Lewis added 10 in the win.

Thompson, Hoover set to battle for spot in state…