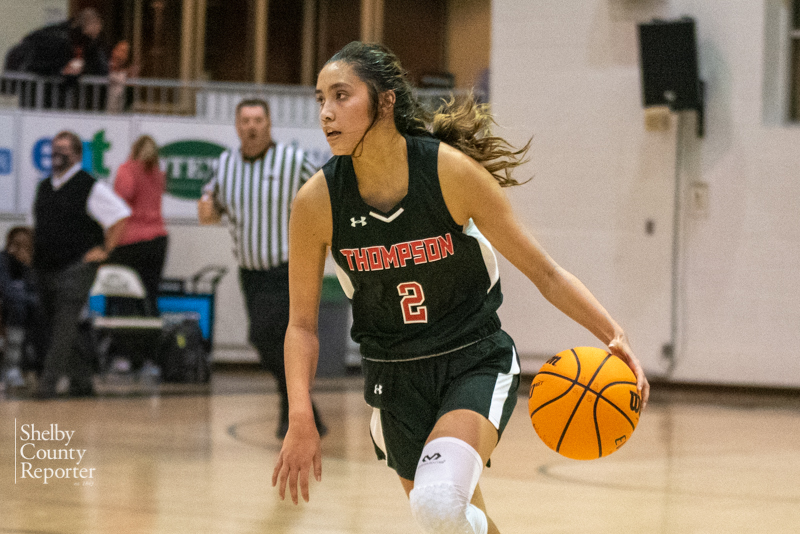 Thompson’s girls basketball team picked up a 56-29 win against Woodlawn on Nov. 17, to grab their second win of the young season. (Reporter photo/Keith McCoy)

ALABASTER – Marty Smith and his Thompson Warriors bounced back with another win Tuesday, Nov. 17, as they dispatched the Woodlawn Colonels at home with a big first quarter and never looked back taking the win, 56-29.

It was a game of runs in the first half, but the Warriors’ runs extended past the first quarter and into the second. Down 5-0 early, Thompson started to turn its defense into offense as girls got in passing lanes and played very aggressively.

The frenzied style of play caused many turnovers for the Colonels who were panicked by the constant pressure. The Warriors built momentum getting to the free throw line 14 times in the first half and forcing 23 turnovers in that same span.

Senior Lindsey Cook scored all seven of her first-half points off steals, while Alicia Reasor got to the hoop with ease scoring nine to lead Thompson on a 22-0 run that carried into the second quarter.

Alayah King was also all over the place grabbing rebound after rebound and getting to the line, chipping in seven points and nine boards.

Woodlawn was able to counter with a 9-0 run, but the Warriors came right back with a 9-0 run of their own to end the half. A big part of Thompson’s win was also in the paint, as they dominated the glass to pick up 15 offensive rebounds in the first two quarters alone.

All the extra chances left the Warriors with a comfortable 31-14 halftime lead.

Thompson got hot from the field in the third quarter and didn’t even need to hit the charity stripe.

Reasor added another seven points to her total, as Smith often subbed his first and second unit in to keep players fresh. The Warriors held the Colonels to just two field goals in the quarter as the lead ballooned to 50-22.

Reasor led all scorers with 16 points in three quarters of play while Natalie French and Dasia Huynh came off the bench to score nine and seven points, respectively.