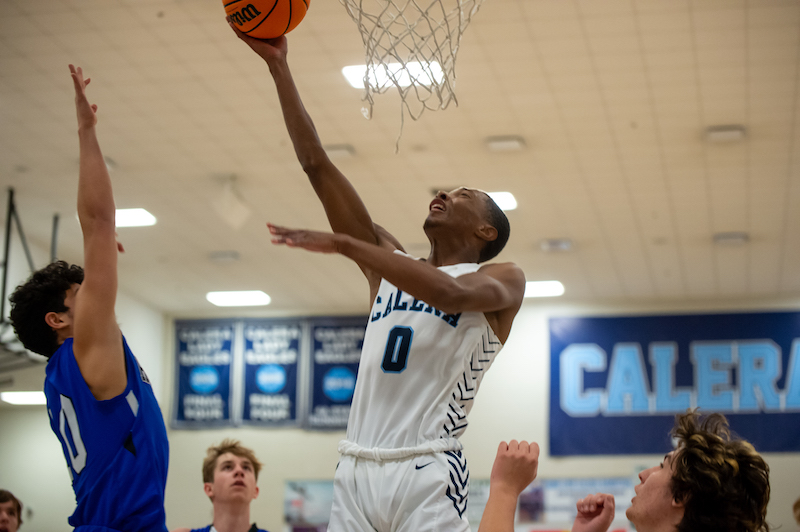 Isaiah Green, above, led Calera to a high-scoring 85-74 win against rival Montevallo on Friday, Nov. 20. (For the Reporter/Larry Dancy)

CALERA – In a high-scoring rivalry game where both teams scored at least 24 points in two different quarters, the Calera Eagles were able to outlast the Montevallo Bulldogs in an 85-74 victory on Friday, Nov. 20.

The Eagles (2-2) scored 27 in the first quarter and 25 in the fourth quarter to total 52 of their 85 points in the game, while 10 players scored in the game, including three finishing in double figures.

In the opening quarter, Calera was able to create some quick separation, which was key against a dangerous Montevallo (1-2) offense.

The Eagles got points from nine different players behind 11 field goals and a 5-8 mark from the free throw line, which led to 27 points, eight of which came from Jordan Eggleston.

Calera also found a way to play its best defensive quarter of the game and shut down the county’s returning leading scorer in Michael Jones to just two points, while the Bulldogs totaled just 10 points.

That gave the Eagles a strong 17-point advantage at the end of the opening period, but Montevallo’s dangerous offense and Jones could only be shut down for so long.

That was proven in the second quarter when Jones knocked down three 3-pointers and dropped 15 points by himself, which played a big part in 25 points as a team, including an additional five from Kial Cottingham.

Calera still posted 15 points, including two 3-pointers from Matthew Windham, but the Bulldogs had crawled back into the game down just seven at 42-35 going into the break.

That was the start to a compelling final three quarters between the two teams.

In the third period, the Eagles regained the momentum slightly thanks to an 18-point quarter, led by six from Xzayvion Childress.

Montevallo added 15 points as well, but that allowed the Eagles to extend their lead by three points to 60-50 going into the final quarter.

That’s when the real fireworks began.

In the fourth, the two teams combined for 49 points in a thrilling offensive finish to an already exciting game.

The Bulldogs were able to score 24 of those 49 points with their second best quarter on that end of the floor thanks to knocking down eight of 12 free throws in the period as well as seven field goals.

But the first-quarter deficit of 17 points became too much to overcome for Montevallo after Calera finished the game with a 25-point quarter.

With their 25 points in the final quarter, the Eagles fended off a strong offensive comeback from the Bulldogs to cement the 11-point win.

In addition to Green and Ford, Eggleston finished in double figures with 11 points, while every scorer in the game had at least five points.

Jones led Montevallo with 25 points, including nine field goals and a 4-6 mark at the free throw line.