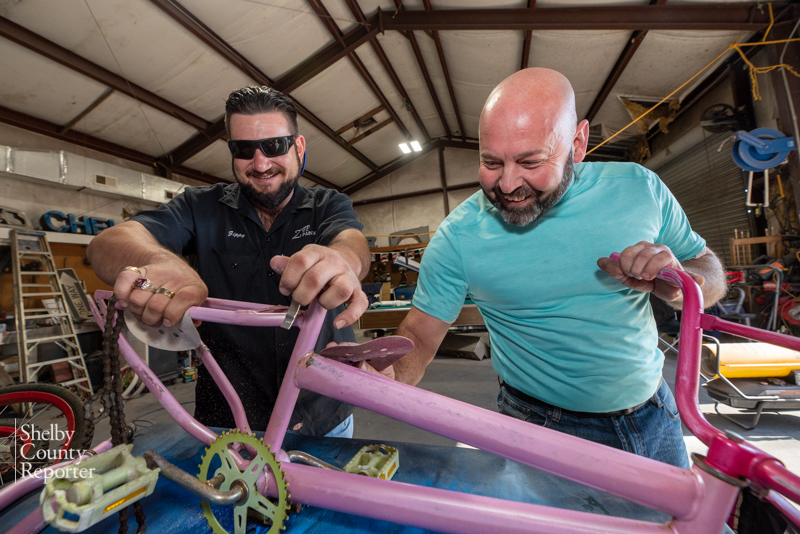 CHELSEA – Chelsea resident Charlie Bradford was watching a group of children ride their bicycles one afternoon when he noticed his friend’s son’s bike had a broken pedal.

“The poor kid was devastated,” Bradford said, recalling his immediate desire to help. “I told him, ‘I could fix your bike. I could weld the pedal back on for you, and it will be good as new.’”

Bradford did just that, but he also went a step further and added a few new details to the bike.

Several weeks later, he was ready to return the child’s bike to him.

On the night of Sunday, Nov. 1, the idea came to Bradford of restoring more bikes to give to children for Christmas or at times when they do not have one.

He called his friend Zac Ingram, who owns Z.I.P.P. Painting in Chelsea, about the idea, and Ingram said he wanted to be a part of the effort.

The next step was to share the idea with others and start collecting bikes to restore.

“I kept thinking, how am I going to get bikes to fix for kids, and then find the kids?” Bradford said.

He decided to create a public group on Facebook, called “Bikes 4 Kids. (nonprofit organization),” to post needs and updates and receive messages regarding kids in need.

Within four days of forming the group, Bradford said 30 kids had been recommended for receiving bikes.

By the end of the week, the Facebook group had nearly 300 members, and messages were continuing to pour into Bradford’s inbox.

At the end of three weeks, the group had reached more than 600 members.

“It’s grown really big in no time,” Bradford said. “I did not see all of this coming; not this fast, anyway. It took off, and it’s still going strong every day.”

The bikes are given to children at no cost to their families.

A local auto parts store has donated paint materials, several individuals have donated tires and seats, and others have donated money or even new bikes.

“Whether they get custom or new, we’re still giving bikes to kids,” Bradford said.

Parents may share their children’s color preferences and interests with Bradford so the bikes reflect their individual personalities.

“They can design a bike themselves,” he said. “It’s for all kids.”

As of mid-November, Bikes 4 Kids had 40 kids lined up to receive bikes for Christmas.

Ingram, who serves as the membership committee chairman for Zamora Shriners of Central Alabama, said he and Bradford are restoring a bike for a 5-year-old girl named Chloe, who has regained the ability to walk.

Bradford’s goal next year is for at least 100 kids to receive bikes.

Anyone who would like to donate a used or new bike may take it to one of several designated drop zones, including Chelsea Wrecker Service in Chelsea, Miller Tire Shop in Sylacauga and Lighthouse Community Church in Harpersville.

Monetary donations also may be made. For more information, send a message through the Bikes 4 Kids. (nonprofit organization) Facebook page.

“I appreciate all the support we can get,” Bradford said. “We want this thing to go as long as kids want bikes, and I don’t think that’s ever going to end.”