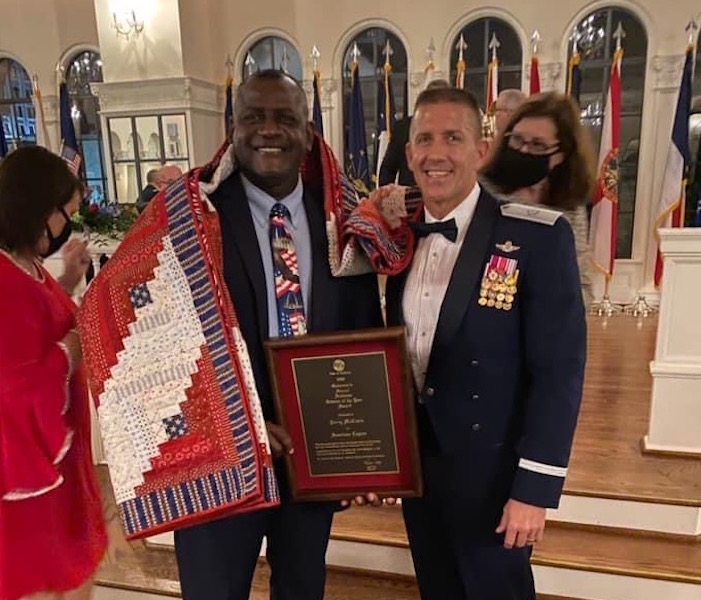 Jerry McClain received a special honor as the Governor’s Veteran of the Year in Alabama thanks to his work with American Legion Matthew Blount Post 555. (Contributed)

PELHAM — Jerry McClain, a Pelham resident and veteran, recently received the special honor of receiving the Governor’s Veteran of the Year for the State of Alabama award, which highlights outstanding achievements by veterans.

The award’s purpose “is to honor an outstanding veteran in the United States each year who has made the greatest contribution to further the patriotic interests of veterans and veteran organizations throughout the country,” according to the National Veteran’s Day Organization, which administers the awards.

It was McClain’s work within the American Legion Matthew Blount Post 555 that led to him receiving the award, according to American Legion 23rd District Commander Richard Kaster.

“He has been an outstanding member of the American Legion Matthew Blount Post 555 in Pelham,” Kaster explained. “Because of his many accomplishments, he was selected as the Legionnaire of the Year 2020 for Post 555, therefore, we at the 23rd District approved and recommended Legionnaire McClain to the 2nd Division, consequently, the 2nd Division Commander approved Jerry McClain to be elevated to the American Legion Department of Alabama for consideration.”

McClain has gone out of his way to have a positive impact on the community and seeks to spread the goals of the American Legion, as well as lessons he learned while serving his country, to make his community a better place to live in.

“Besides being an active member of Post 555, he has done many community projects as he is actively involved as the senior pastor at Kingdom Christian Church in Pelham, while also helping as a Whole Health Peer Facilitator at Birmingham Veteran Affairs Medical Center, a member of the Hoover Metro Kiwanis Club, a former president of the Clergy Team of Pelham, a member of the Pelham Drug Prevention Impact Team and a member of the Hoover area Chamber of Commerce,” Kaster explained.

Fellow members of the American Legion saw his service to community and country as a vital source of leadership and example setting for others, which is why they were led to nominate him for this award.

“As you can see Jerry McClain is a special person that balances many different areas by multi-tasking and prioritizing what is important,” Kaster said.