COLUMN: A special way to help kids this Christmas 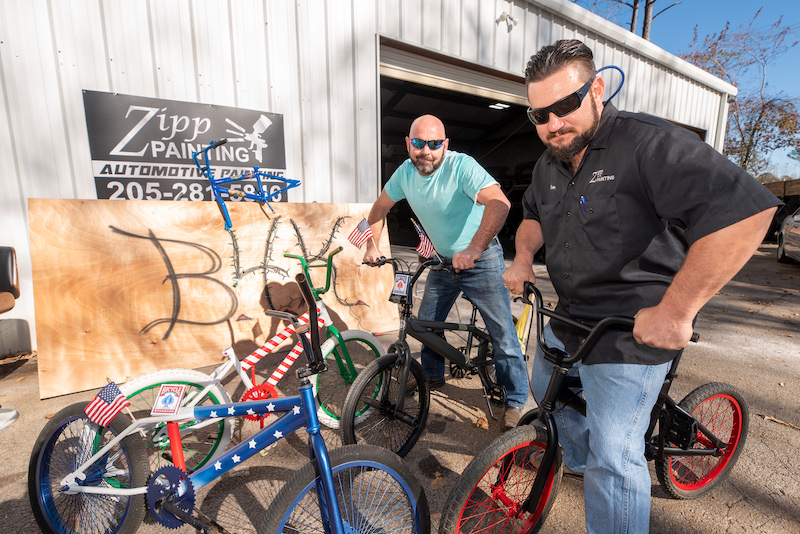 Charlie Bradford, left, and Zac Ingram have started a nonprofit organization that will give bikes to those in need of one this holiday season. (Reporter photo/Keith McCoy)

For many of us, a Christmas gift means something we’ve had our eye on all year, normally something new, shiny and often times expensive. But for many, it means just having something they already had getting repaired or dreaming of something that can’t be afforded.

And recently, Chelsea resident Charlie Bradford found a way to help kids who were hoping for a new bike this Christmas but may not be able to afford one, especially during a trying year such as 2020.

The idea came to Bradford after he noticed one of his friend’s son’s bikes had a broken pedal. He then told the kid he could fix the bike for him by welding the pedal back on properly, but Bradford didn’t know at that moment what he was about to start.

He not only fixed the pedal but added some new details to the bike before returning it to the child, who was ecstatic.

And that’s when the idea came to him. Close to the holiday season, Bradford wanted to restore more bikes to give them to children in need of a bike this Christmas and even beyond.

With the help of his friend Zac Ingram, who owns Z.I.P.P. Painting in Chelsea, Bradford came up with the idea of “Bikes 4 Kid.” The nonprofit runs on donations of broken or unused bikes, and then flips them to make them good as new for kids in need of a bike.

At first, he didn’t know how he was going to get donations or reach kids, but through the Facebook page for the group, that problem was quickly put to rest.

In three weeks, the group had more than 600 members, the donations started to flow in, and now Bradford and Ingram are set to make bikes for 40 children this holiday season.

Because of the overwhelming number of people who reached out nominating children for bikes, Bradford had to cap the number at 40 to make sure the number was achievable this year, but the plan is to continue this throughout the year moving into 2021.

With donations of old bikes, bike seats and tires, as well as money and even new bikes, the possibilities are endless for what he and Ingram can accomplish, while a local auto parts store has also donated materials to help.

One of this year’s bikes will go to a 5-year-old girl named Chloe, who has regained the ability to walk again. Now, through this project, she’ll be able to get on a bike and ride.

It’s those kind of children that make this project worthwhile despite the amount of work it’s going to take. Bradford and Ingram both see the greater good and the bigger picture of helping others during a time of year where many are wanting gifts for themselves.

And with the goal for next year set for at least 100 children to receive a bike, this is just the beginning of a project that is going to impact so many in a positive way. What an inspiration!

Expanding the beauty of OMSP a good idea