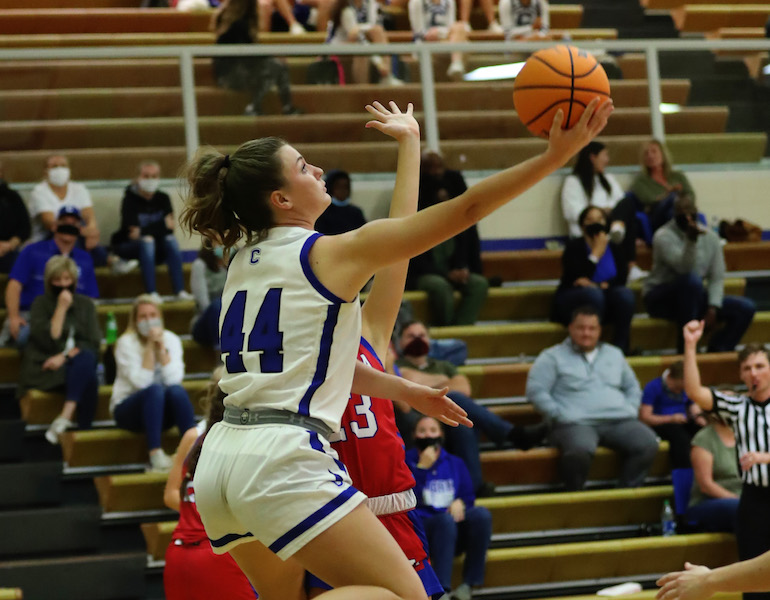 The Chelsea girls basketball team continued an impressive stretch of play with a 62-51 win against Hueytown on Tuesday, Dec. 1. (For the Reporter/Cari Dean)

TUSCALOOSA – After losing two of their first three games this season, the Chelsea girls basketball team has bounced back with three wins in a row after taking down Hueytown on Tuesday, Dec. 1 in a dominant 59-19 road victory.

The win was part of a strong three-game stretch where the Hornets beat Calera 56-8 and Helena 62-51 as well.

And what was impressive in the most recent win, like the Calera win, was the defensive effort against the Golden Gophers.

Chelsea gave up no more than nine points in any quarter of the game and seemingly got better on that end of the floor throughout the game.

But the Hornets matched that intensity on the defensive end with a strong start offensively in the first two quarters thanks to 19 points in each.

In the first quarter, Chelsea got six points on two 3-pointers from Mary Henley Carney, while the Hornets knocked down four total from beyond the arc and got points from six different scorers in the period.

That led to their first 19-point frame in the first half, while the defense had its worst quarter of the game but still only gave up nine points to take an early 10-point lead.

Then, in the second quarter, Chelsea got five points each from Sydney Schwallie and Lexi Redo, which led to another 19 points from the team.

With the defense playing even better and making Hueytown earn everything at the free throw line, the Gophers could only muster up six more points.

That helped Chelsea take a dominant 38-15 lead into the halftime break.

And while the offense didn’t have the same success in the second half, the Hornets knew all they needed was a strong defensive second half to put the game away, and that’s exactly what they got.

In the third quarter, Chelsea only posted six points on the offensive end of the floor behind four from Ashley Washington, but that’s all the Hornets needed to extend their lead thanks to the defense giving up just two points in the period.

With Hueytown only hitting one field goal, Chelsea was able to take a 44-17 lead into the fourth quarter.

In the final period, Washington closed out a strong game as the leading scorer thanks to hitting two 3-pointers, while the defense gave up just five more points to complete the 40-point victory.

Washington set the pace with her 14 points to lead all scorers, while nine different players scored in the game, including six with at least five points.