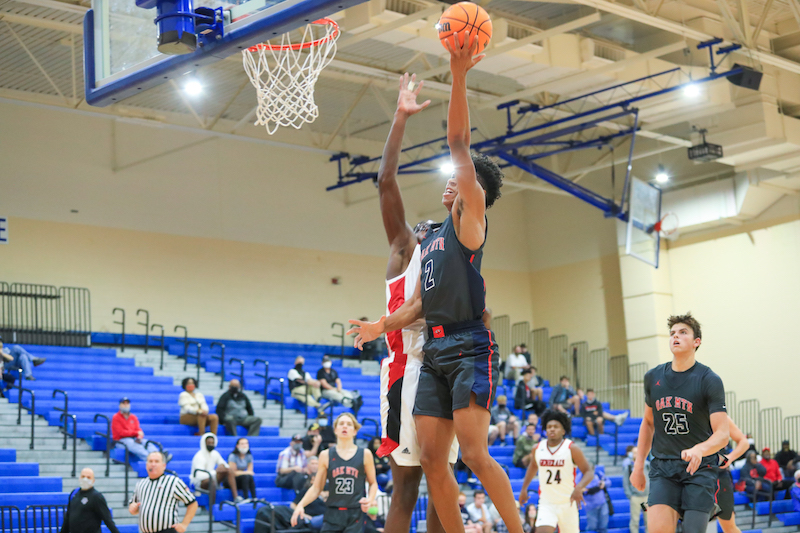 Noah Young, above, had a strong fourth quarter to help the Eagles break a tie game en route to a 62-53 road victory against Hewitt-Trussville on Dec. 1. (For the Reporter/Dawn Harrison)

TRUSSVILLE – The Oak Mountain Eagles followed up a 2-1 showing in the Sneaky Pete’s Rebel Classic by winning their first game after the Thanksgiving break against another Class 7A team by taking down Hewitt-Trussville 62-53 on Tuesday, Dec. 1, for a road victory.

The Eagles (5-2) took a tight game through the first three quarters and squashed it in the final quarter thanks to Noah Young.

As a member of the football team this year, young had just started getting into a rhythm with the team over Thanksgiving and it paid off during the win against the Huskies.

The senior put together nine of his 15 points in the final quarter, including three field goals and a 3-4 mark from the free throw line. That broke a 42-42 tie going into the period by helping the Eagles put up 20 points in the quarter, while the defense saved its best stretch of play for the end, giving up 11 points to help the Eagles create separation for the nine-point win.

It was a big win for Oak Mountain, who had its team close to 100 percent for the first time this season and that showed when Wilder Evers was back in action after missing several games following a strong start to the first half of the first game of the Eagles’ season.

Back to his normal self, Evers was a reason Oak Mountain had a strong start to the game thanks to scoring 11 of his 15 points in the first quarter behind three made 3-pointers.

Hewitt-Trussville was able to keep pace behind 13 points, but Evers and the Eagles had done enough to take a one-point lead at the end of the quarter.

That led to an exciting offensive quarter in the second period as the two teams combined for 37 points.

The Huskies again hung around to stay in the game with an 18-point quarter, which made the score 33-31 at the half.

And by hanging around, Hewitt-Trussville was able to capitalize early in the second half thanks to some defensive adjustments at the break.

The Huskies held the Eagles to their lowest output of the game at just nine points, while they were able to score 11 points in the period to even the game at 42-42 heading to the final quarter.

But Oak Mountain’s defense also played well in the third quarter and that continued into the final quarter.

After giving up 13 and 18 in the first two quarters of the game, the Eagles allowed 11 in both the third and fourth quarter to keep the Huskies in check.

That helped make the difference when Oak Mountain and Young came out on fire offensively in the final quarter to pull away for the 62-53 victory.

Shaver led the way with 18 points in the win, while Evers and Young both posted 15 apiece thanks to dominant bookended quarters.